I’ve toyed with the idea of heading off on a writing retreat for some time now. They’ve become increasingly popular and are held in locations all around the world, in venues ranging from the exotic and luxurious to the more artistic and quirky. Going off on an organised retreat for a week or so could, I kept thinking, prompt me to get ‘that book’ out of my head and onto paper. Almost everything I’ve read about such events indicates that the no-doubt-amazing authors/editors running the retreats possess elusive gems of information or insight that simply make it all happen. Or so say past participants…

But every time I get to the point of booking I end up backing off. Clearly I’m either not bold enough to take that leap or am, essentially, ambivalent as to whether my hopes and aspirations are likely to be to be realised. So the idea goes back on the to-think-about-it-later pile… until the next time something brings it to mind.

Coming across this great cartoon by Gary Snider yesterday  was that thing. After I’d had a chuckle at things like the procrastination patio and the first draft furnace, I started pondering on why it is that I haven’t committed to a retreat, but keep thinking about doing so. 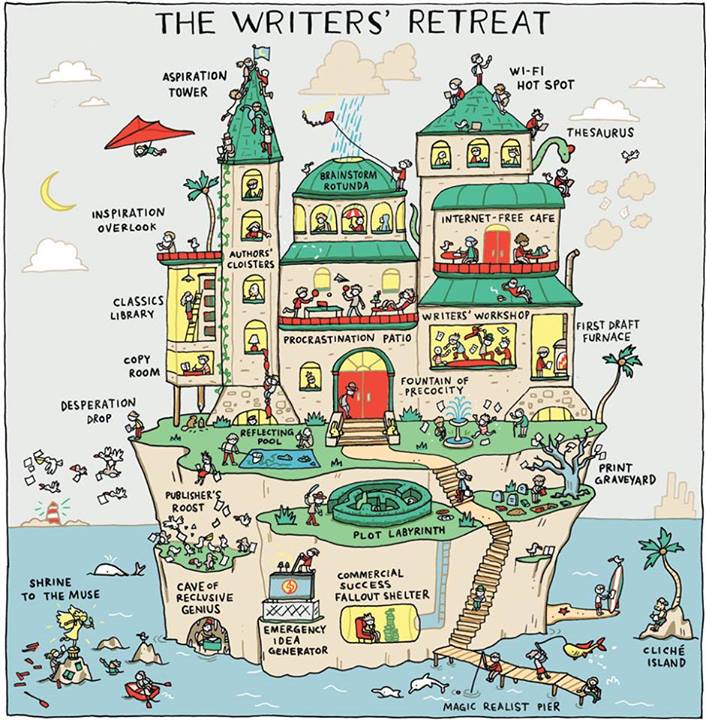 Over the years I’ve attended numerous professional development sessions, seminars, and writing/editing-related events and have often come away feeling slightly dissatisfied. I head back to work or home trying to lock onto the positives, but generally seem to end up thinking that I must have missed the point. Surely, I think, the meditation exercises and group-interaction and sticky notes and coloured pens really were useful in some way and I’m just not seeing it.  Why would all these facilitators utilise tools like this if they’re not useful? It can’t possibly just be to fill up time… can it?

Those thoughts then get overlaid with others. ‘But if you wanted a meditation workshop, that’s what you’d have signed up for…’ and ‘Really? Coloured pens? Again? What’s the point of that…?!’ As a result it generally doesn’t take long for any potentially positive aspects of these sessions to be eroded or eradicated. Would my reaction to a writing retreat be any different? And what could I plausibly achieve by attending one, whether locally or overseas?

Like many people who think about going on a writing holiday, I theorise that doing so would provide me with some time-out from my day-to-day life. It might make a space for contemplation and for reflection – something that writers all apparently need. This in turn could plausibly push my creativity buttons and, with luck, unleash a veritable flood of amazing prose. If I chose wisely enough, it might also provide me with guidance and advice from people who know the industry and who could help me to move my project along.

But sensible-me looks at this list and immediately starts to consider whether I actually would gain anything that might provide forward momentum for my writing. Do I really need or want to go on a retreat somewhere with a bunch of strangers? Would it turn out to be little more than an excuse to go on sightseeing junket, have pyjama parties and eat meals someone else has prepared? Would this make me write more – or better – or just be yet another (expensive) distraction?

Further down the track I’ve no doubt that a manuscript assessor and an editor will be essential, but sensible-me insists that the writing has to come from me – and that no-one can wave some kind of literary magic wand and make it all happen. So today she (I) came up with a bold alternative to ramp up my productivity. How about just going off somewhere on my own for a few days sometime? I could stay somewhere beautiful, evade chores and work for a week or so, have meals made for me and not have the distraction of other aspiring authors and scheduled retreat events to contend with.

Bringing my inner writer to the fore and giving her some space to get stuck into writing doesn’t depend on someone else or even on being somewhere – it’s about whether I can schedule my life in a way that allows her to come out to play, whether it’s for an hour in a coffee shop scribbling in a journal or for a week in a seaside shack or all-amenities provided resort (tempting!). This probably wouldn’t work for everyone – but since team sports aren’t really my thing, coloured pens and post-it notes drive me crazy and the idea of pyjama parties makes me shudder, sensible-me may have just come up with a cunning plan…

… and I totally have to get a copy of Gary’s poster – I think that it shows what’s inside every writer’s head!