From time to time I catch a glimpse of something or someone that triggers unexpected associations, often conjuring up odd and unusual trains of thought that stay with me from minutes to days. Sometimes this happens when I’m driving.

On the way to work I occasionally play traffic-tag with another vehicle, passing and being passed by it a number of times. Usually something makes the tag vehicle memorable. This time it was a little more unusual than average. Initially I didn’t realise that I’d somehow become part of a funeral cortege, at least not until I passed the glass-sided vehicle for the second time. Initially only part of my brain registered the unusual shape – and promptly went off to hunt through my internal database for a reference point to make sense of what it had noticed.

The hearse itself was quite tall at the back and had a lot of glass on display. The overall impression I was left with was somewhere between a Popemobile and a glass dome on wheels. The glimpse of a white coffin covered in flowers provided just enough extra visual input so that, by the time I passed the vehicle for the second time, the closest match inner-me had come up with was – of all things – Snow White.  Apparently that little part of my brain that hunts for associations and connections logged the glass bubble and floral tributes and my storage banks went straight to cross-referencing Disney movies. 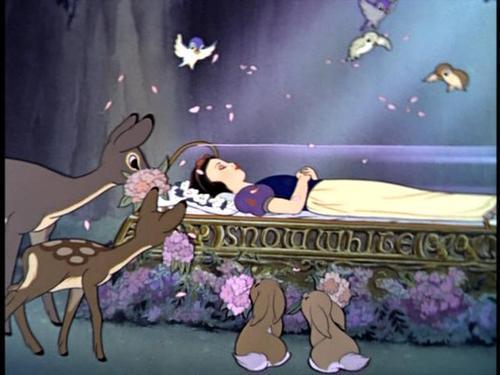 The image of Snow White in a Popemobile-hearse, driving around Perth in search of her prince, stayed with me all day. It was quite a persistent little meme and was still lurking in the recesses when I found myself watching Billy Connolly’s Big Send Off on TV that night.  Having recently been diagnosed with both prostate cancer and Parkinson’s disease, Connolly has produced a programme that examines a wide range of issues relating to death and funerals. The topic was handled surprisingly sensitively, although with his usual trademark humour – including a duet with Eric Idle.

The thing I found oddest in the programme was a drive-through funeral parlour. The idea seems to be that, instead of having a formal viewing of the deceased in a chapel – which I find pretty odd to start with, the body can be laid out in what is effectively a shop window. People can then drive up – as to a take-away food outlet – to view the deceased from the comfort of their vehicle. There’s no need to get out of the vehicle at all – you can just sit there, contemplate the display, and then sign the guest book before driving off. Next please. A tidy, hands-clean sort of approach, I guess. 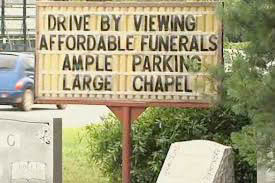 Connolly also attended a six-day international funeral directors convention & expo in Austin (Texas). He went along to have a look at some of the products that he might end up using at some stage. Coffins of every sort, from cardboard to oak, with or without silk lining and ornate handles and optional original artwork, were on display. They provided a real eye-opener as to just how much a bereaved person can be fleeced for by less-than-scrupulous vendors.

Then there was the mushroom burial suit – a full body suit that’s embroidered with threads infused with mushroom spores. These work with in conjunction with an externally applied liquid spore compound to decompose the body within the suit. What wasn’t clear was just how long it would take for the mushrooms to do their work. I rather like the idea of the body being recycled this way, although I did wonder about what happens to the residue – and to the mushrooms – afterwards.

And then there were hearses – big, small, showy, motorbikes with sidecars and… the Snow White Popemobile! It exists! I had started to suspect that I’d halfway invented the vehicle, inner-me elaborating wildly once it had latched onto the idea. But there it was, in amongst all the other snazzy vehicles. It didn’t actually have a glass dome – (inner-me did invent that bit) – but other than that it was fairly Snow White-ish. 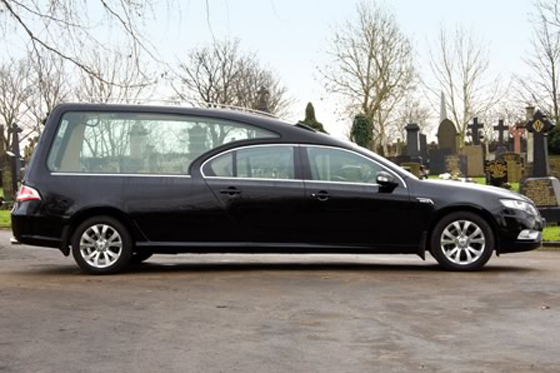 I wonder if the availability of this style of hearse indicates a shift in how society is starting to view death. Perhaps it’s just a variation on the drive-through viewing option. I’m not sure how I feel about that, having been socially conditioned to avoid public displays of – well – pretty much any sort, really. But I can see that being ‘allowed’ to grieve – to acknowledge death and grief publicly – could help people to deal with loss and to move forward with their lives. It might also enable others to manage their response to the grief that friends and acquaintances experience, without feeling awkward or inappropriate.

I’ve been told a number of stories of how people will go out of their way to avoid contact with someone who has experienced the death of a loved one, almost as though it’s contagious. Perhaps having death on display, whether in a Snow White hearse or a drive-through funeral parlour, might start to move society away from this cultural death denial. It might allow death to be more openly acknowledged as part of life. On the other hand, it might simply be yet another example of a society obsessed with portraying itself as colourfully and noisily as it can at all times.

Either way, I do rather like the idea of Snow White being driven around town, actively seeking out her prince rather than waiting for him in the woods surrounded by sad bunnies and bambies with big eyes.