With Himself off in foreign climes for the past few weeks, life has been interesting in a number of ways. It’s also been random and chaotic, so cooking just for myself has seemed like an unnecessary add-on to already overly busy days. To ensure I do actually eat, I came up with a cunning plan: pressure cooker soup. Each weekend I’ve cobbled together some or other variety of soupy-goodness, popped it in the fridge and then consumed it over the following week. I’ve had chicken and barley, mixed vegetable and, last week, pumpkin. All quick, easy, nutritious and very satisfying to come home to. Win all round.

So when I saw that Chef Dale Sniffen was running a pressure cooker workshop last week, I immediately signed up in the hopes of some inspiration for other quick and easy options. As it turned out, the vehicle he chose to showcase pressure cookers was… pumpkin soup, which was quite amusing.

Admittedly there’s not a whole lot of technique to pumpkin soup. It’s one of those things that pretty much anyone can make. But we were treated to an entertaining couple of hours of his company and a wealth of cooking tips while Dale first made pure bone chicken stock, then used that to make his soup. Although the soup itself only took six minutes in the pressure cooker, the process of getting it to that point was all high theatre.

First came the caramelizing of the onions, with appropriate audience appreciation of colour and aroma. Then the adding of tomato paste and the slow simmer to bring out the intense tomato flavour in that before adding the ginger, nutmeg and bay leaf. More audience participation. Dale then deglazed the pan with the ‘richly aromatic and flavourful’ pure bone chicken stock. This achieved it was – finally – time to add the coarsely chopped pumpkin and potato, bring it all to the boil, attach the lid and wait for it to get up to pressure.

Six minutes later Dale ran cold water over the pressure cooker to achieve a fast pressure release, blitzed contents with a stick blender, stirred in some chopped butter, salt and (white) pepper – and we finally got to taste the result. He plated up his creation, garnished it with sour cream and sesame seeds, then served it with pieces freshly made flat bread – which was exceptionally good: soft yet crunchy, slightly salty and a perfect accompaniment to the soup. 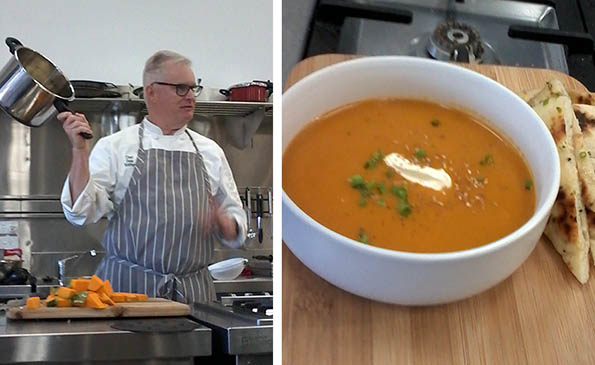 I’ll definitely make the flat bread next time I make pumpkin soup, but I think I’ll stick to my tried-and-tested version, adapted from a recipe I found in 2008 (according to the notes I’ve scribbbled on it). Like Dale’s it can be made in a pressure cooker or in a conventional saucepan (which just takes longer). But it’s significantly simpler – which works for me. Let me know if you try either/both of the recipes – I’d be interested in some feedback.

What you need: 1 tablespoon extra virgin olive oil , 2 medium brown onions (peeled and coarsely chopped ), 2 cloves of garlic (diced),  2cm fresh ginger (peeled and sliced), 2 tablespoons red Thai curry paste (I’ve used green, but prefer the red) , 1 large butternut pumpkin (washed, de-seeded and roughly chopped – don’t bother to peel it), 2 litres of chicken or vegetable stock (pure bone stock probably is best, but a couple of stock cubes and some water works fine), 1 packet dried coconut milk, reconstituted with water (or a 400ml can, if you prefer – but the dried stuff is a terrific pantry standby), juice of 1 lime (use lemon if you don’t have a lime to hand).

To make the soup: Heat a tablespoon of oil in your pressure cooker, then add the onions, garlic, ginger and curry paste. Cook, stirring gently over a low heat for about five minutes to release the flavours.  Add the pumpkin chunks. Stir well, then add up to 2 litres of the stock – depending on pumpkin size (You want your pressure cooker at least 1/3 full and no more than 2/3 full).  Stir well and bring the mix to the boil, then put the lid on the pressure cooker and let it come up to full pressure. At this point it’s important to reduce the temperature to low, then leave the pot at pressure for about six minutes.  I usually just turn the heat off after this and leave the pressure to come down all by itself, but you can release the pressure more rapidly if you’re in a hurry by placing the pressure cooker in the kitchen sink and running cold water over the top of it. Once the lid’s off, blitz the soup to smooth paste, then return pot to the stove (no lid) and add the coconut milk and lime juice.  Garnish with chopped fresh coriander when you serve it, along with a dollop of plain yoghurt, but as often as not I don’t actually bother. The soup is tasty as is.

To make the bread: Place everything except the spices in the bowl of your electric mixer and, using the dough hook on low speed, mix for about 30 minutes. The dough should be soft but not too sticky. Cover and leave to rise overnight then turn the dough out, add the spices and knead until smooth. Divide into 6 equal portions and roll these each of these out into a (more or less) 15cm square shape, then pull and turn each one with your – shaping each one into something that resembles a (small) pizza base, less than 1cm thick. Melt about 100g of chopped butter and set this aside. Pop your frying pan on the stove and heat enough olive oil to just coast the bottom, then add your first flat bread. Cook for about 1- 2 minutes, until it starts to bubble up, then flip over to cook the other side – this doesn’t take very long. While side two is cooking, brush melted butter on side one (the cooked side) and sprinkle that liberally with freshly ground sea salt. Stack the cooked flatbreads until they’re all done, then slice into triangles and serve with your hot pumpkin soup.

NOTE 1: If you’re cooking for one, just cook one of the flatbreads and pop the other five rounds in the fridge or freezer for another day. Or cook them all, eat as many as make you happy and save the rest for the next time 🙂

NOTE 2: You can actually use any (unpeeled) pumpkin you like – butternut happens to be my preference.

NOTE 2: To make Naan, simply replace the water in the bread recipe with plain yoghurt.

One thought on “Winter warmer”