In 2012 we decide to remove 20 pencil pines from around our pool. The trees had provided a very effective barrier for many years, screening us from both an unsightly wall and our neighbour’s garden. But their day was done. The narrow garden beds couldn’t contain them any longer; they were overcrowded, sections were dying off and a lot of leaf litter was ending up in the pool.

My plan was to replace them with a range of less messy plants, including  citrus and rosemary one one side and an evergreen screen of passionfruit vines on the other (to hide the ugly wall). To this end, we recruited help, removed the trees and created an enormous amount of pine mulch – to be used at a later date. It was an epic task spread over a few weekends and the food bribes in no way compensated for all the hard work. Thanks again, everyone 🙂 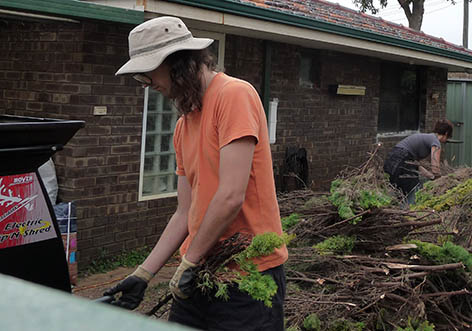 In due course we planted three citrus trees (dwarf orange, calamondin, sunrise lime), along with some rosemary and various fillers. Himself then built some outstanding fan-shaped supports for the proposed passionfruit vines. They were perfect – and by Christmas that year we had three hardy little vines starting to creep up the trellising.

Our Nellie Kelly  flowered abundantly and produced prolifically – an excellent choice for WA gardens. The Panama Gold vines we planted on each side were also very productive, but the fruit didn’t go the purple colour I associated with ripe passionfruit. You’d think the name would have been a clue, but… I chucked half our first crop when they fell of the vines because I thought they were green and the rats had been at them.  I only figured it out when our dog found a small pile of the fruit I’d put aside to throw away. She tossed one around like a ball until the skin broke open – much to her surprise. Even more so for me when I saw the ripe pulp in it – and in all the others I then checked! Oops 😛 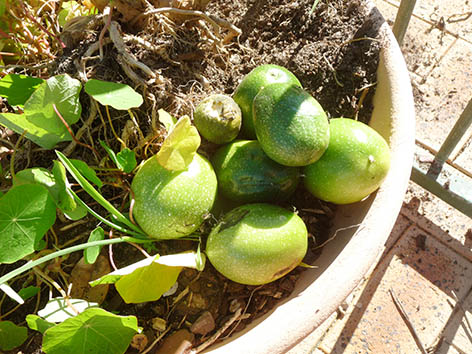 To be fair, rats do love passionfruit and will eat through sections of the skins to lick out the contents – even if the fruit isn’t ripe. We’d found enough empty fruit casings under the vines for my leap of assumption to be at least plausible – however misguided 😛

What I recently discovered about passionfruit vines is that they really do need regular pruning in spring. Cutting back the denser growth allows for better air circulation and fruit development. It also keeps them from getting overgrown and heavy. Sadly I only realised this once the wooden trellises had collapsed behind the vines, crushing many of the major stems.

In order to repair or replace the trellises, the  (mostly dead) vines have had to be removed – probably several years earlier than was strictly necessary, since it turns out that passionfruit can produce reliably for about six years. So this weekend we got the last of the vines out and now it’s time to re-evaluate what we want to do to screen that ugly wall. We look at it from the kitchen windows every day, a constant reminder and prompt that something will need to be done. New trellises and more vines… or some other option, like an epic mosaic project? The debate continues. 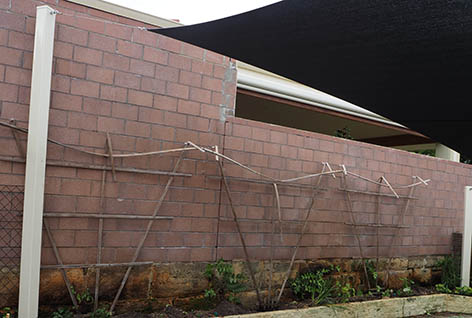