So what exactly is a GenghisCon?

I’m often met with puzzled looks when I mention that I’m involved with a group called GenghisCon. “What on earth is that?” or “Did you say Genghis Khan?” or “Say what?” are fairly standard responses. Despite the relative frequency with which I get those responses, I’m always slightly taken aback. After all, it’s been part of my milieu for about 16 years…

So what exactly is a GenghisCon and how did it start?

Essentially, it’s a low-cost, max-fun 3-day geek annual convention. GenghisCon provides a range of activities from table-top gaming/roleplaying/LARP/console gaming to panel discussions on technology/gaming/geek culture/science/etc., as well as hands-on creative workshops. There’s even a one-day marketplace with traders and stalls, selling a wide range of geek loot, books and handcrafted items. We sometimes have water-balloon and water-pistol fights (because we can), tend to eat junk food and have been known whack each other (gently) with foam rubber swords 🙂

It all started in 2001 with DaughterDearest. A science fiction enthusiast and, at that time, a member of MARS (the Murdoch Alternative Reality Society), she’d become increasingly indignant at the cost of the then one-and-only science fiction convention in Perth.

“It’s iniquitous!” she ranted. “How do they expect students to afford those prices? And it’s not like it’s even fun anymore!”

As the annual convention drew closer, her litany of irritated exclamations escalated. Dinnertime conversations centred on the topic long enough for the parental unit (me) to eventually find it tedious. We’d thrashed the topic to death, we all agreed on the basic points and I was over it. So I suggested that instead of complaining, perhaps she should do something about it – perhaps start her own (low cost, max fun) convention…

One thing about DD – she does rise to a challenge – and this time she did so in spades. The next day she thrashed the idea around with some friends at MARS, several of whom were very keen to roll with it, and invited a few of them over to the old homestead to take the discussions to the next level. Before we knew it, we’d been invaded by a flurry of students and our whiteboard was being colonised with ideas, strategies, timelines and possible convention names.

This group included Danielle Linder (aka DaughterDearest), Mark Turnley, Douglas Linder (aka Boychilde), John Blahusiak, Wendy Macdougall, Colm Kiely, Mike Fineberg and Dean Caruana. By the second meeting they’d been joined by Zara Astle, Robyn Creagh and Msquared – who also thought the idea of an all-new max-fun convention rocked. Together, this happy band made up the first committee.

A lot of brain storming later the name GenghisCon emerged – a nod towards Genghis Khan, who’s empire changed the face of the world…

Having a name anchored the convention as a reality, after which things rapidly gained momentum. Robyn drew a Mongolian horse-shield/UFO logo, which remains the identifiable GenghisCon image. Grant Stone  agreed to be our Patron Saint and his tacit support of the new convention helped it to gain traction with the broader SF community. An affordable venue was found, a programme of events – with a strong focus on interactive fun – was devised, and some fundraising was undertaken to pay for the venue and to keep costs down.

A Brains Trust was set up: Himself had attended the very first Swancon (back in 1976), Sibling#1 had served as Treasurer on various Swancon committees, DrMark – a regular visitor and a long-time Swancon-er – had been on the Board of WASFF, Boychilde had uber computer skills, and I had helped to establish a couple of not-for-profits in the past. Between us we could offer suggestions on incorporation, insurance, finances and venue options when needed.

From there it was a relatively short step to the realisation of DaugterDearest’s core idea: a small, student-and-impoverished-fan oriented science and speculative fiction convention, with a strong emphasis on interactive fun. GenghisCon is now a Perth institution, with successive volunteer committees keeping to the basic premise of providing a small, friendly, fun, and inexpensive annual event.

It goes to show that a small group of people with a cool idea can make things happen. If you have an idea, why not start a club, build a convention, join a committee – get involved and create the culture you want to enjoy. If not you, then who? 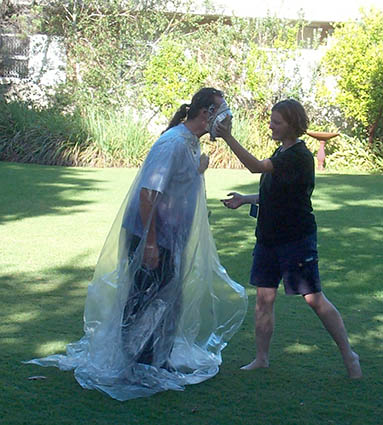 9 thoughts on “So what exactly is a GenghisCon?”