My sister’s a great fan of all things quince. The first time she tasted it was when she was living in Angola many years ago. She was out shopping and bought a tin of what she thought was marmalade. The tin was labelled in Portuguese and, as she was still learning the language, she understandably thought that marmelo meant marmalade. As it turned out, it meant quince paste – also known as quince cheese.

She was an instant convert and went on to track down the raw fruit, finding the flavour astringent, rather tart and very much to her taste. I, however, had only ever tasted quince jelly (jam) until fairly recently and wasn’t overly impressed with it. But that was before I tried my hand at all things quince…

It all came about because friends of ours (Don and Ann) have nine mature quince trees on their property down in Collie, about 200km south east of Perth. A few weeks ago, when the bulk of their fruit was ripe, they decided to put a halt to trail of destruction that the local bird life was inflicting on the crop. To this end, they spent a couple of weekends stripping the fruit off all nine trees – and ended up with a LOT of surplus-to-requirement fruit.

So, one Sunday evening, the phone rang. It was Don, and the conversation went something like this: ‘Hello? Nik? Are you guys interested in some quinces? I have a few in my car and I’m half way back to Perth…’ ‘Sure, why not?’, said I, somewhat naively. ‘I’m sure I can do something with them…’

Don and his fruit-mobile arrived a couple of hours later. When I exclaimed at the quantity of fruit he presented us with, he just laughed – then told me I should see what was still in his car! Our share was four large carry bags of fruit, each bag containing about 45 quinces. This equated to approximately 9kg per bag (we weighed them!), which means we had in the region of 36kg of quinces in our fridge… and no idea what to do with them.

The fridge smelled terrific but I found that I don’t enjoy the fruit raw. Since I can’t bear to waste food, it became my mission to find out how to prepare it. I started by researching quinces and quince trees in general. I discovered that they’re related to roses, apples, pears, almonds, plums and apricots – that was a surprise. The trees are deciduous, hardy and drought-tolerant. They don’t require much maintenance (such as pruning, spraying, etc.), are self-pollinating and thrive in wide variety of climates – from temperate regions all the way through to the sub-tropics. 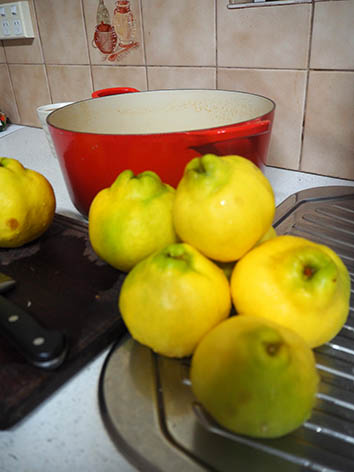 Quinces can be stored for up to three months in the fridge. They’re strange-looking fruit – a little like a cross between an apple and a pear in shape. But they’re slightly knobbly and their skin is both waxy and slightly furry to the touch. As the fruit ripens it goes from a light green to a lovely golden yellow and becomes surprisingly strongly and sweetly perfumed. It’s a very solid/dense fruit, but I’ve found that it bruises surprisingly easily – so some care is required when handling and preparing it.

I managed to offload about dozen or so fruit to DaughterDearest and saved a few for my sister, but have managed to process almost all the rest (we have about ten left). I discovered that the flesh, which starts off butter-coloured, turns pink and then a deep red when cooked – that was a surprise. My first adventure was quince paste – this was an epic endeavour that took thirteen hours all up. The slicing, dicing, cooking, stirring, pureeing and reducing took about seven hours. After this the mixture it went into a low oven for a further six hours to finish setting. Wow. The upside is that quince paste makes a great addition to cheese platters and keeps really well – which is lucky, since we now have a freezer full of it! 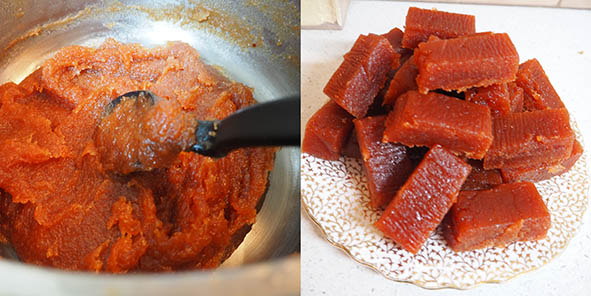 Next I tried two varieties of fruit leather – one spiced with cardamom, cinnamon and so forth, and the other with honey and lemon. Both turned out really well and we have a whole heap of that in the fridge. 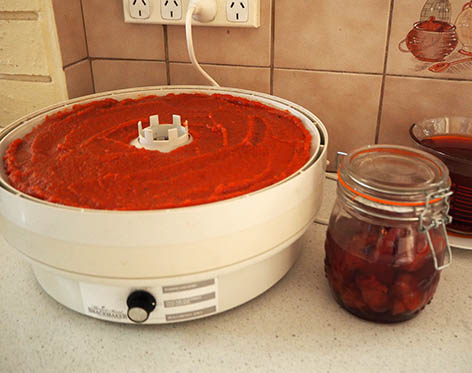 We’ve also been eating slow-poached spiced quince on our muesli & yoghurt every morning for the past couple of weeks and I even made a quince (and almond) cake at the weekend. That was super-tasty too and well worth repeating. A big stride forward was to find that the fruit can be pressure cooked to save time, although I only found that out towards the end of the production line. I’ll know better next time.

All in all, I feel I’ve conquered quinces and done justice to Don and Ann’s gift of (36kg!) of quinces – but it’s definitely time to move on to other culinary adventures 🙂