To my mind, the word creativity carries with it connotations of originality, imagination and success. For those of us who don’t consider ourselves to have ‘an artistic bone in our body’, this feels self-limiting. Our inner critic tells us that we aren’t artistic, thus we can’t possibly be innovative or inventive, thus creativity is outside of our operational zone. This rather circular argument ignores the fact that creativity isn’t actually about being artistic. It’s about making something out of nothing, about having an idea and following it through, about implementing an existing idea in a new way. It’s about being prepared to try things out, about accepting that ‘trying’ is the first step to ‘doing’ – not the last. 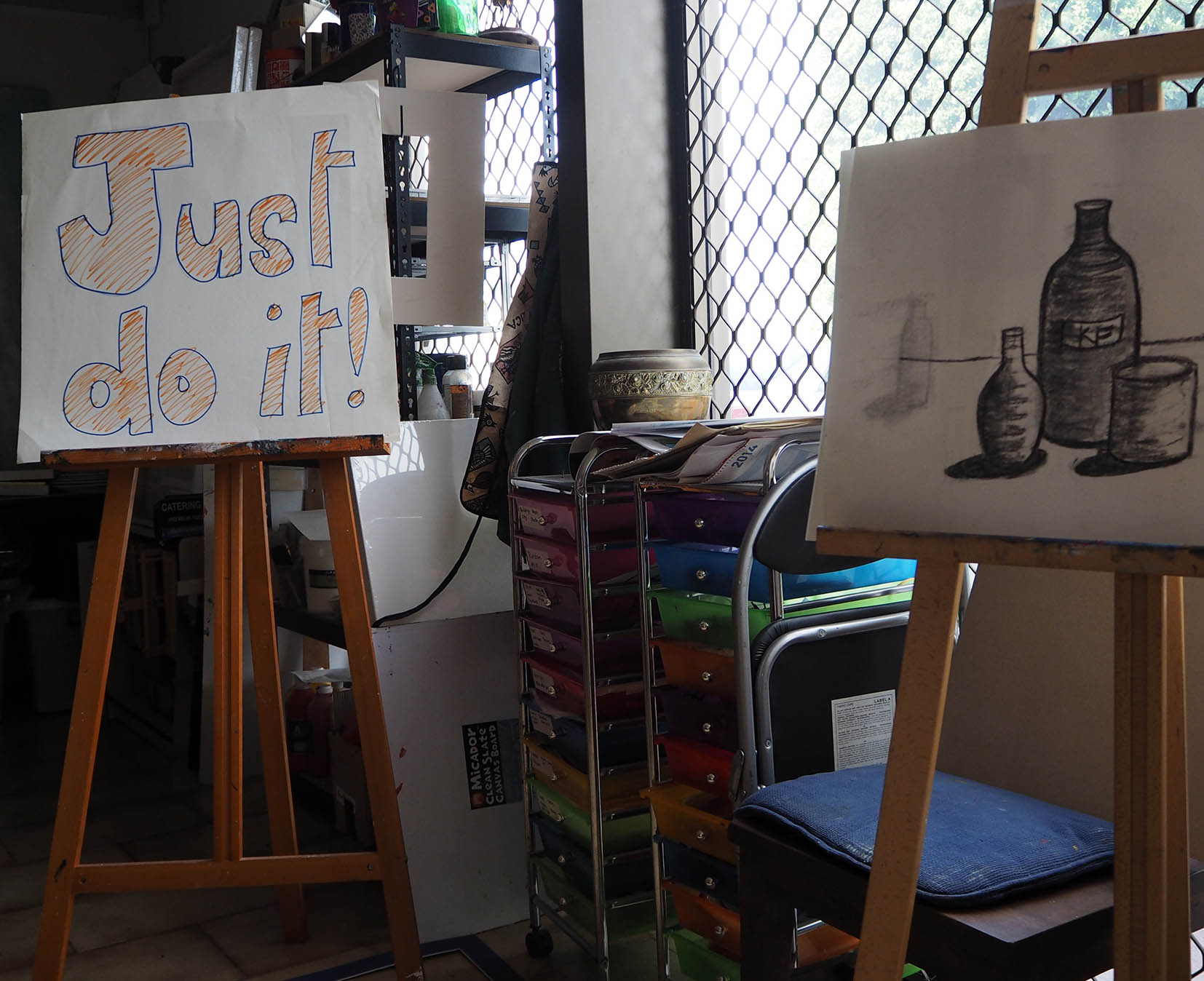 Last weekend I took part in an all-day drawing workshop designed for absolute beginners, for those who – like me – believe they simply can’t draw. Over the years I’ve been to a number of writing/other workshops and, in most of them, the instructor has suggested that I silence my inner critic (MIC) and just get on with it.  Anticipating this, I asked MIC to be an observer for the day rather than a participant. She must have agreed, because I had the best day and learned far more than I expected to. I even tried sketching in charcoal, which turns out to be a very satisfying medium to work in/with. I felt very creative, very capable.

Later on I reviewed my sketches at home. Away from the supportive vibe of the workshop, I could see many more flaws in my attempts than I had in class. Clearly MIC was back in play and she was making up for lost time. Before all my confidence fled, I decided it was time for us to get to know each other a little better.  My goal was to try to establish how and why my perceptions of my creative abilities had been set and, in so doing, to figure out how MIC  could help rather than hinder me.

I started by listing the sorts of ideas that, broadly speaking, might be limiting my creativity and empowering MIC.  The first thing that leapt to mind was the pervasive belief  that creativity is inherently self indulgent. MIC does have a tendency to murmur to me that I should be doing ‘something useful’ instead of ‘messing about with mosaics’ (or whatever).  Then there’s the notion that creative pastimes require time, money and an appropriately creative environment. Considering that creativity is so broad ranging, this is clearly a furphy – but I’ve nevertheless bought into each of these ideas over the years as well. Another roadblock for many people at various times is the rather childlike need for external approval to validate the endeavour (whatever it is) – and I’m no different. However, the most ubiquitous underlying limiter I came up with is self-doubt. This is like a vitamin B12 shot for MIC – it feeds her and allows her to grow and expand her influence over what I do.

The source of self-doubt is complex, built up in layers over many years and even more experiences. This often makes it quite difficult to single out an originating point or, indeed, to know whether such an assumed point is accurate or imagined. MIC and I worked together on trying to figure this out. We eventually narrowed it down to (surprise!) my childhood, to my memories of drawings done by my mother and brothers. I remember these as things of beauty, an unreachable benchmark. I tried to draw like them and fell short, so I concluded that I couldn’t draw.

This outlook very probably shaped the way I’ve tended to approach creative activities ever since. Over time my belief that I can’t draw turned into a view that I probably can’t do other ‘arty’ things – or, at least, not do them very well. MIC and I agree that this is not an outlook that serves any useful purpose. It’s based on the half-remembered impressions of an eleven year old – a child who didn’t consider that it takes work to do something well, that her mother and siblings probably spent hours and hours sketching.

I haven’t tamed MIC (she is a rather unruly minx), but we’ll work together to formulate a better working model. We’ll try for one that promotes creativity rather than hampering it, perhaps by turning ‘Critic’ into ‘Critique’.