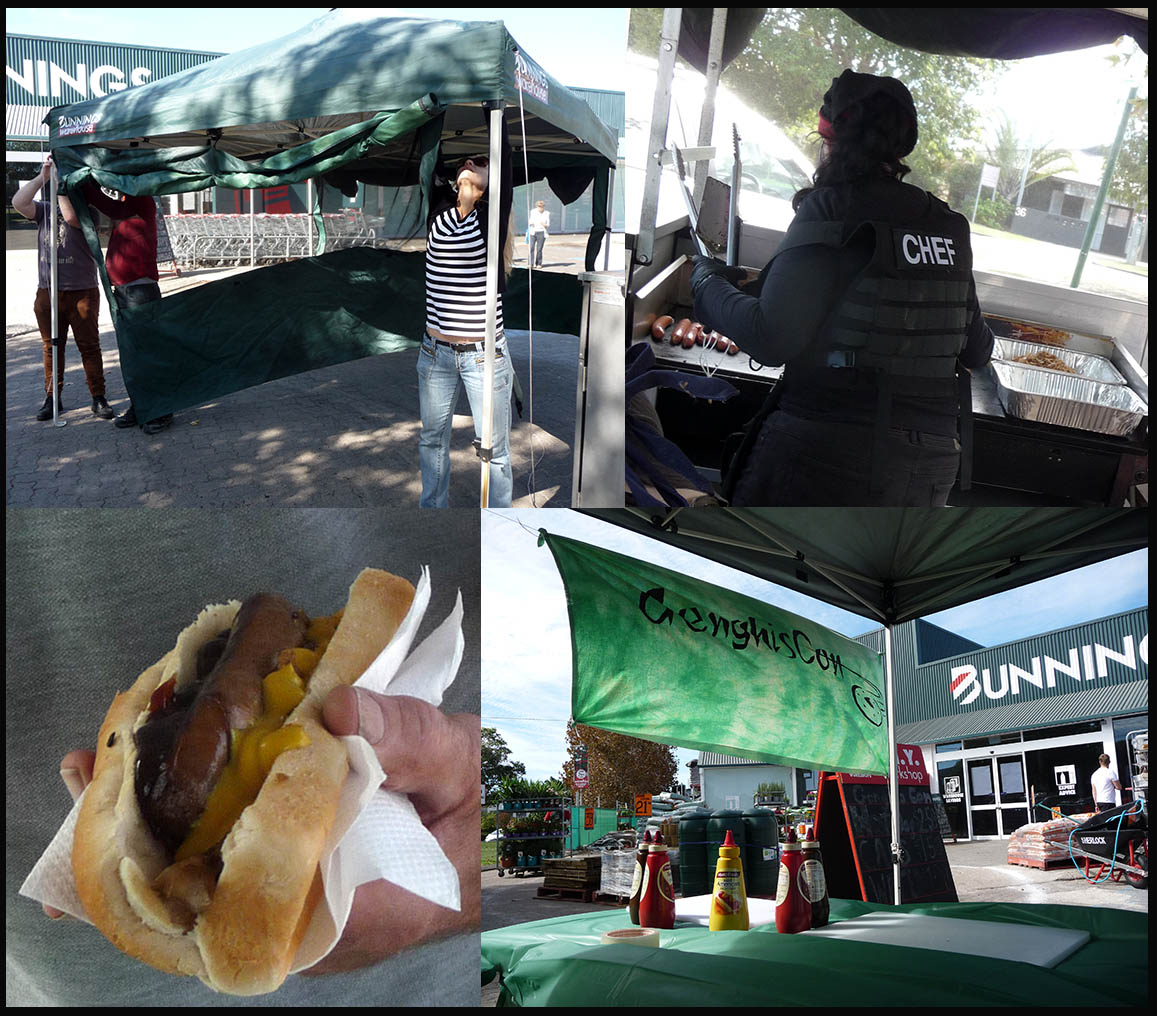 Last week saw us gearing up for a sausage sizzle fundraiser barbecue outside our local hardware store. The preparation phase included getting up to our elbows in raw onion a few days before the event – and the miasma continues to permeate my house and fridges, car and numerous plastic containers. 40kg of medium sized brown onions is a whole lot of onion. In fact it’s two very large sacks of onions. Being involved in peeling and processing them individually made me realise much more clearly just how much ‘a lot’ really is – and it’s heaps!

We had a good system going, though: five people and an industrial strength slicer/dicer machine. This combination of teamwork and machinery peeled and shredded all 40kg in about four hours. This was followed by a fair amount of cleaning up, because little bits of onions somehow just went everywhere. Then we had to find somewhere to store 16 bags of onion slices for two days, whilst leaving space for about 400 sausages. My fridge and freezer may never recover from this little exercise…

The adventures with onions was just one part (but definitely the smelliest part) of the preparations. Other aspects included ensuring that the group’s public liability insurance was up to date and that the venue was booked – these things needed to be done well in advance. Then there was costing, sourcing and purchasing the onions (!), soft drinks, sausages, sauces, bread rolls, cleaning equipment, oil, serviettes and so forth at the best prices available. We also had to acquire 30kg of ice and a 135 litre esky (giant cooler box) to store the items that had to be kept below 5 degrees on the day of the ‘sizzle,’ specifically the onions(!) and the sausages. The hired esky may also never recover completely, despite the enthusiastic application of bleach after the event…

Next time round we’ll try to get some of these items donated, which would no doubt help our bottom line.

Only one the helpers on the day had had any prior involvement in running one of these events – and her input was invaluable. Nevertheless, there was a very steep learning curve for all of us. Fortunately we had a relatively short day of trading, since it was a holiday. This meant we could only set up to start selling by 11.30am and finished up at about 3.30pm. Generally the stalls run for twice that long, which would have been quite a stretch for our little team.

Next time round we’ll also try for some extra helpers so that we can work in shifts, rather than flat out for the whole day.

Things I learned along the way:
* Shopping wisely (like pre-ordering the bread rolls in bulk and keeping and eye out for special offers on soft drinks) can bump up the bottom line considerably
* You can NEVER have too many helpers
* Aprons are amusing
* Onions are smelly… really, really smelly… and the stench lingers in a house (my house!) for an awfully long time 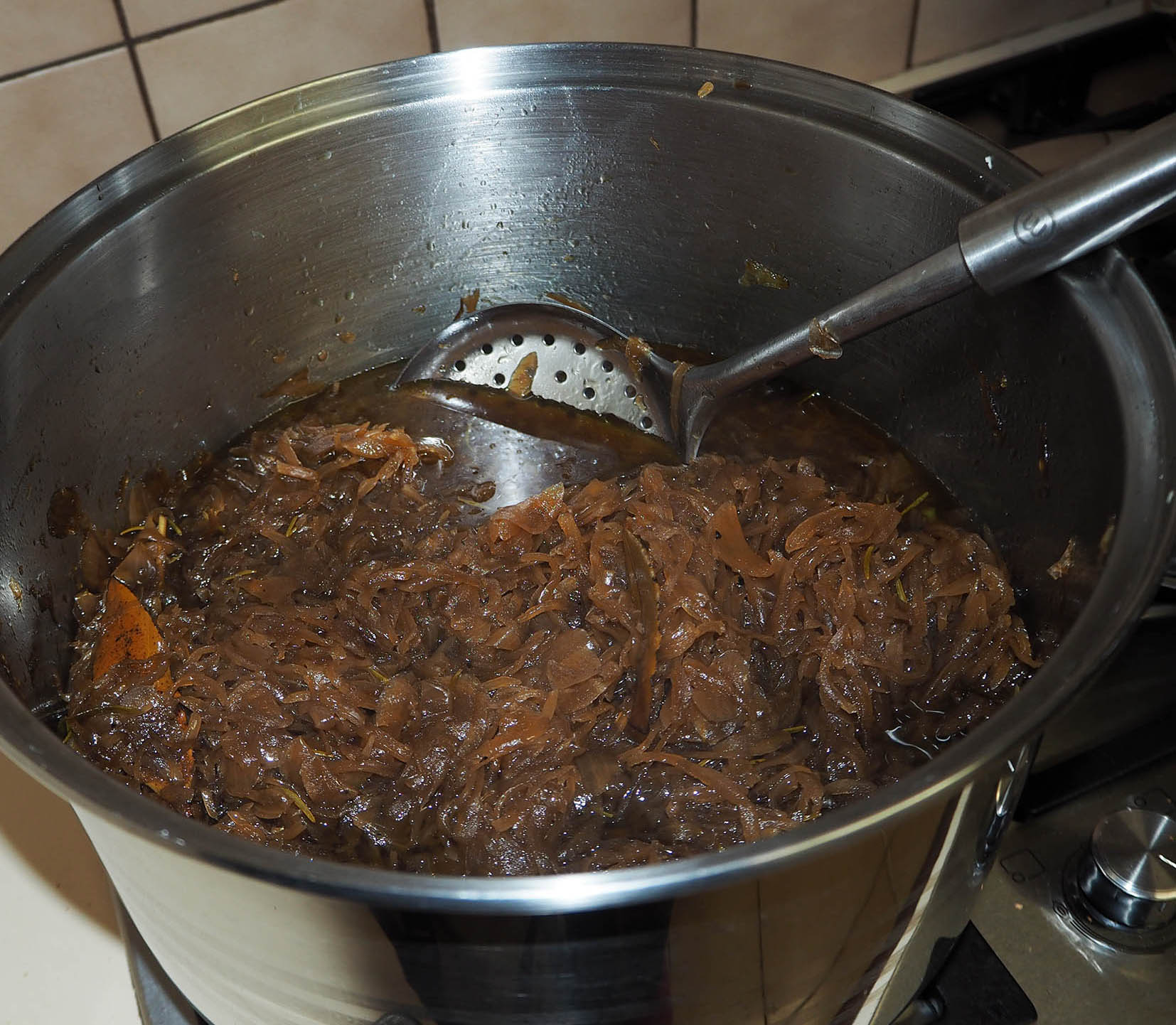 On the up side, it turns out that Confit d’Oignon (French onion marmalade) is a cunning way of using up a LOT of leftover sliced onion – but it’s quite a lot of work and once it’s made it needs a home… I don’t need that much onion jam – so all offers of rehoming a bottle or more of onion jam will be considered.

After all the dust has settled we made about $650, which is an excellent start towards our fundraising goal of $4,000 for the year. We raise the funds in order to cover the venue hire and insurance for our annual convention (GenghisCon). If we didn’t do this, we’d have to bump up our membership prices (like every other local convention has) and we quite simply don’t want to go there.

One thought on “A learning exercise”