6am is far too early to be awake on a Saturday morning… unless there’s a darn good reason. Does going to the markets to bulk shop for fish, meat and veggies qualify as ‘a good reason’? Hell, yes! The cost savings are significant and future-me can put her feet up and recover later, whilst congratulating past-me on epic shopping success and bargains galore. 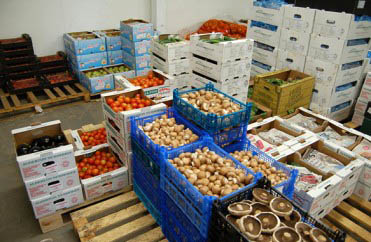 When I first joined a veggie-buying co-op twenty+ years ago it was an economic necessity. I was surprised at how much fresh food cost in Australia when we arrived, and being part of the co-op made including a wide range of fruit and veg in our diet affordable. Our group was made up of four families and our budget per week was $60, although we often spent less than that. We all took it in turn to head off to the markets at the crack of dawn on Saturday mornings, armed with our specially made collapsible shopping trolley, a pen and notepad to record the prices, and our allotted $60 in cash. Each week brought with it some surprise items and, depending on who the shopper was, the surprises ranged from a share of a box of quinces to a similar quantity of parsnips… or capsicum… or zucchini or… whatever seemed like a good idea at the time. Being part of this definitely broadened my family’s eating repertoire considerably and taught them just how many ways I could disguise zucchini!

I confess that I initially found the market experience quite confronting. The determination with which people set about their shopping was impressive, the jostling and competitiveness unnerving, and the need for rapid mental arithmetic a challenge. It took several visits for me to get a handle on how to select the best buys and on how to manage the vendors in order to get the best service. In those days I noticed that many market goers were from Vietnam and China; as time passed there were more people from the Philippines, then from Middle Eastern countries, then Africa – a reflection of the changes to Australian migration policy, no doubt. These days it’s much harder to pick an ethnic trend, the markets having become a multicultural microcosm in action.

Over time the numbers in our co-op have diminished. Families have grown up and moved on, with the result that we diehards go to the markets less frequently. Since we’re down to two groups of people, we now take it in turn go every three weeks instead of weekly. This makes going more of a novelty and, on our turn, we now choose to go a little earlier and incorporate other outlets into our market adventures.

Our first stop is usually the fish market, where great crates and crates of fish stare up at me accusingly with their googly little eyes as I sneak past. Even with plastic gloves on, handling whole fish is not something I do willingly. The stench of fish, the slippery floor, the occasional splash of fishy-goo on my feet – all of this is highly unappealing. The meat shed next door is next, where the sheer expanse of raw meat is unsettling in a different way. Bags and bags of vacuum packed beef on trestle tables, piles of ubiquitous bones lurking menacingly in giant crates, the band saw singing tunelessly in the background and the queue to pay wending oh-so-slowly through all this is tough going on an early-morning stomach.

In due course we stash our assorted purchases in a cooler box in the car, then head across to the much larger veggie markets to face yet another throng of people, more jostling, more queues, more toting of heavy boxes. So why do it? Very simple: the price difference between the markets and a fish vendor, butcher or suburban veggie store is significant. Our most recent market haul included frozen fish fillets (hoki) at $5/kg, fresh trout – googly eyes and all, salmon steaks (we have a house guest who can’t eat red meat), many kilos of beef mince and ox heart at remarkably low prices (for the dog and cats), stir fry beef strips and a couple of roasts (because we still eat red meat sometimes!), cherry tomatoes ($5 for a huge box of these – the pick of the week), red capsicum, pears, nectarines, corn, potatoes, zucchini, cabbage, watermelon and some very tasty freshly-picked prunes. Our fridges and freezer are bulging at the seams and we’re set for fresh food for the next three to four weeks.

I remind myself of this every six weeks when I roll out of bed at 5.30 on a Saturday morning, wondering if it’s really worthwhile. From a both a future planning and cost point of view it is absolutely and always worth the occasional early morning and a bit of shoulder bumping from strangers. It’s also fun, in a weird sort of way – and last time I was there the coffee stand was open and the (charming) barista charge me $1 less than the standard price for a cuppa just because she liked my accent and I smiled at her. Win! 🙂