Doing my own thing

My first adventures into mosaic were under the guidance of the wonderfully talented and eccentric Evi Ferrier in 1998. She facilitated a workshop series in which a whole lot of volunteers helped to mosaic the front of the art shed at Glyde-in Community Centre in East Fremantle. That’s me in the purple tie-dyed shirt and hat, creating my very first gecko mosaic, with Evi sitting alongside me filling in some of the background and offering encouragement. 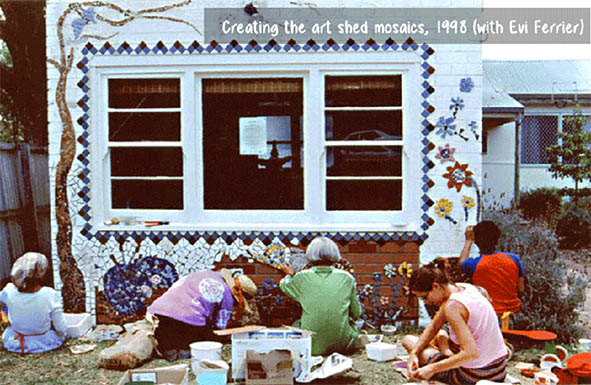 Some years later I attended another workshop with Evi, this one at her home in Mosman Park. She introduced us to a book called The Big Orange Splot, by Daniel Manus Pinkwater. It’s a rather cute children’s picture book and Evi read it to us to encourage us to be bold in our creations. The main character in the story is Mr. Plumbean, a man who paints his house to reflect his dreams rather than fitting in with the rest of the neat little box-houses in the street.

It was clear from Evi’s (very unusual) decor that she had taken Mr Plumbean’s example to heart. The house is mosaiced from top to bottom, inside and out, and it clearly does reflect her dreams. The bottom of the swimming pool, the garden walls, the sides of the house, internal walls – it’s a visual overload. That day, I came home and created my own orange splot house mosaic – both as an homage both to Evi and as a reminder to myself to remember be more like Mr Plumbean.

Having said that, I must confess that my own house is actually pretty mundane. It’s my garden that reflects my reluctance to be boring. It’s random and untidy and completely at odds with my oh-so-tidy neighbourhood – and I revel in it. This even extends to the verge outside our garden wall, where I grow sweet potatoes, loquats, strawberry guavas, rosemary, pigface (carpobrotus glaucescens) – and the grass I can’t quite seem to get rid of. 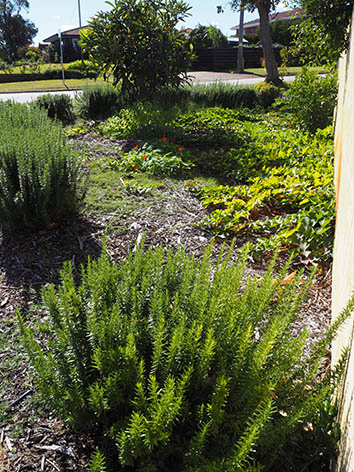 Every season brings something new in some part of my garden. Most days I go outside at least for a while, sometimes with a cup of tea and a book or (more often) to play with the hyper-active dogs. I inevitably see something I can tweak: a branch to prune, a plant to move or repot, some herbs that need picking, or a flower to photograph. The whole thing is an ever-evolving work-in-progress that makes me smile every single day. No exceptions.

Do you have dream – and does your house or garden reflect that vision?

2 thoughts on “Doing my own thing”