I’ve often wondered why it is that so many people seem to have a tendency to want to share intimate details of their lives with complete strangers. Whether it’s on a plane, at a bus stop, at the hairdressers, in a checkout queue at the supermarket or in any number of other situtations, unsolicited confidences are routinely both given and received. Since friendship is held to be an idealised bond of great significance, a relationship that overcomes isolation and provides support in an otherwise unsympathetic society, why turn to strangers?

What brings this to mind is my regular visits to the local indoor hydrotherapy pool to indulge in what I like to call exercise. In reality it’s an hour or so of wallowing around in deliciously warm water (now geothermally heated!) and indulging in moderate activity, often to the sounds of whatever audiobook I happen to be listening to at the time. Of late, however, my MP3 player hasn’t been cooperating, so I’ve been subjected to the sounds of the spa pump and the general conversation of other pool users, both of which I try to turn into white noise to accompany my exercise routine.

Striding determinedly up and down the pool in chest deep water wouldn’t, at first glance, appear to provide an ideal opportunity for someone to try to share details of their life with a fellow pool-user, whether a stranger or otherwise. Despite this, my experience is that many people go out of their way to strike up a conversation, keeping pace with their chosen confidant or waylaying them at one or other end of the pool with an open-ended question to do so. I always find it confounding when people do this to me, as I’m pretty sure that I don’t have the sort of face/demeanour that necessarily invites confidences. Nevertheless, a great deal of rather personal information is often shared with me. Frequently it appears to be information that the self-same people seem unwilling to share with friends or family, but is laid out in surprisingly intimate detail in the pool with what appears to be little or no compunction. Why is this so?

This week I ended up performing the function of stranger-confidant for an elderly gentleman (EG). I was caught unawares and answered a question in passing as I started walking a lap of the pool, after which escape would have required a level of brusqueness not available to me. I submitted with good grace, but kept walking – which required EG to stride along with me and work for it. He was not at all put off and went on to tell me in graphic detail about his even more elderly sister (EMES), whose attitude to life in general appears to frustrate him enormously. It turned out that EMES is over 90 and underwent hip replacement surgery four days ago, as a result of a nasty fall few days earlier when she fractured her hip. Since then she’s apparently been abusive and angry, says she’d be better off dead and seems to have a fine job in alienating everyone who cares about her. EG admitted that his tolerance is particularly low at present, having fractured his shoulder three months ago. He confessed to being in constant pain as he tries to remobilise the now-frozen shoulder and to regain some movement in the joint. There was more – lots more – about both subjects – before EG’s time was up. He finally headed for the spa and sauna (to ease the shoulder), after which I kept my head down and was careful not to make eye contact with anyone else for the rest of my session!

Then – and later – I started thinking about why people choose to confide in random strangers. My conclusion is that we are all simply keen to talk – particularly about ourselves – and sometimes it’s easier to do so in situations where we’re away from the usual distractions and demands of everyday life. Perhaps this separation provides a space for a people to foreground issues of interest or concern and address them by articulating them to strangers – as often as not to clarify the issue, rather than to ask for advice. I wonder if telling me about EMES helped EG in any way? Will he feel better able to cope with EMES or at least with his frustration about her outlook on life?

Does it help in any way to tell strangers things about our lives? Does the relative anonymity, the absence of shared social circles allow for sharing of this sort without fear of an emotional or social backlash? Strangers are, after all, strangers. As they aren’t part of our social milieu, it removes the need to worry about over-sharing, of burdening them with our concerns or about any associated social consequences. In addition to this, strangers may possess objectivity possibly not available to those close to us and as a result sometimes offer surprisingly useful insights or suggestions. Whilst there is no obligation (real or imagined) to take on board any of the comments received, having shared the issue with a stranger and received such comments could plausibly make articulating it again at a later date to someone closer (a friend or relative) easier. At the very least it might provide some perspective on the issue and thus make it easier for one to manage.

Are strangers then the no-cost equivalent of a psych or pastor? Do they fill the role of someone who has no prior knowledge about one’s life or circumstances and to whom one can unburden woes with minimal risk – effectively a social sounding board? If so, perhaps my retirement occupation could be busking as stranger-for-hire… I apparently have the skills 😛 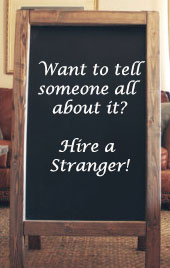