Time for knee(s) up

Last weekend we took the parents up to Gallifrey Forrest Farm to commune with the wildlife (hens and geese and ducks and quail and guinea fowl and cats), and to marvel at the progress that’s been achieved on the propriety over the past 12 months. So many trees have been planted, projects started and others completed – it’s well worth marvelling over.

After tucking into a delicious afternoon tea of fresh fruit from the Swan Valley, along with soft and sticky chocolate brownies and cupcakes made by DaughterDearest, it was time for the grand tour. This is when things got unnecessarily interesting…

One of the less cat-aware visitors slid a door open to step outside, blithely oblivious to the streak of grey lighting headed his way. Cat#1, widely known for her uber-escapologist skills, made her usual flying dash for the door… and chaos ensued.

This cat is both much-loved and rather valuable breeding stock, so she’s never allowed outdoors other than on a harness and lead. So everyone converged on the escapey-cat, with loud cries of shut the door! and aaargh! and No, Cloud!. Since I was sitting closest to the door, I leapt to my feet to tackle said cat and/or shove the door closed. In my haste I managed to get my feet tangled in a little rug, conveniently placed just inside the door for people to wipe their feet on.

Chaos ramped up a notch as I crashed to the ground in spectacular fashion, landing solidly on the pointy bit of my right knee. Fortunately, I missed both cat and door – she’d leapt out of the way and the door had been slammed closed in the nick of time to thwart her escape attempt.

Once things settled down, the grand tour resumed – but it seemed wiser for me to stay put and tuck into the remaining chocolate brownies and a cup of restorative tea. My knee had started to swell quite alarmingly and, although the brownies and tea were lovely, the icepacks, anti-inflammatory gel and elevation helped not in the slightest.

By the time we were ready to leave it was pretty clear that walking up to the car was right out. After some conferring, K (the resident Eagle 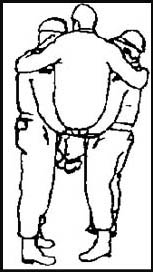 Scout) and Himself (my go-to guy in all things) came up with a cunning plan: a two-handed seat carry.

This involved positioning themselves one on each side of me, passing their arms behind and under my thighs, grasping each other’s wrists firmly, and then lifting me. In effect I was sitting balanced on their crossed over wrists, wedged up against their bodies. It wasn’t comfortable, but it was very effective.

In short order I was stashed in the vehicle and we were off on our hour-long journey back to Perth to drop off the parents, then on to the local hospital. There I spent four exceptionally long hours waiting (a lot), gritting my teeth (a lot), snivelling (far too much), undergoing triage (a fancy word for a first-stage medical assessment), being issued with paracetamol/codeine tablets for pain relief (eventually), examined and sent for x-rays.

In due course the attending physio informed me that I have a fractured patella. This, by the way, is a remarkably painful injury and one I whole-heartedly do not recommend putting on your bucket list!

I was fitted with a removable (hot, heavy, padded) leg brace to immobilise my knee and told that I’d need to be on crutches for a while. The physio recommended a lot of lying down and that I should keep the weight off my knee for the next week. After that, she said, I’d be reassessed at the fracture clinic and we’d ‘go from there’ (whatever that means). Thinks wistfully of magic wands…

So far it’s been a long week (for everyone). My audiobook library is a little depleted, I’ve caught up on my current knitting projects, and discovered that sharing the bed with a couple of anxious dogs who want to be close all the time has its moments. All things considered, I think I’ll leave rescuing Miss Cloud to others in future! 😛 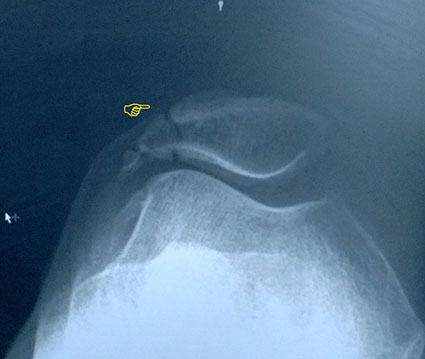