The changes to this piece of legislation will affect about 18,000 not-for-profits (NFPs) and incorporated associations operating in WA. These organisations range from the tiniest of social clubs (you need minimum of 6 members to be incorporated) all the way up to large ones, such as the RAC.

Since the last time the Act was changed was back in 1987, it’s not surprising that the Department of Communities has been hosting a number of information evenings for groups over the past few weeks. I opted for the session at the East Fremantle Yacht Club, since I thought that’d be the most convenient venue. What I – and the Department of Commerce (clearly) – did not take into account was parking.

News flash: the yacht club has minimal parking and the car park (such as it is) is at the bottom of a narrow little cul-de-sac. This resulted in epic traffic flow problems to augment the ultra-epic parking issues. Much aaargh all round; also a lot of people cruising around side streets trying to find plausible parking within walking distance.

I finally landed the last spot outside the East Fremantle Cricket Club and hotfooted it over to the venue, arriving out of breath but just in time. The presentation started almost as soon as I got there and took about an hour, including question time. In short, the changes relate largely to good governance and to protection – both for members of associations and for the public with whom they/it may conduct business. As far as the associations I’m involved with, the following points appear to be most significant:

All in all it was definitely worth attending the session, despite the parking debacle – but it’s not a venue I’d frequent again willingly… unless someone was dropping me off. Walking back alone in the dark, past the (now empty) tennis club parking lot and along the deserted side streets, wasn’t an adventure I enjoyed – but at least it didn’t rain on me!

Whilst community association/groups will have three years in which to make relevant alternations, I’d urge anyone involved in at an organisational level to take the time to make themselves aware of the pending changes and to stay up to date with them. As first step, you could watch a video of the presentation online and download a copy of the PowerPoint slides  You can also access the Transition Pack, which covers most of the details of the changes and will be a handy reference tool. 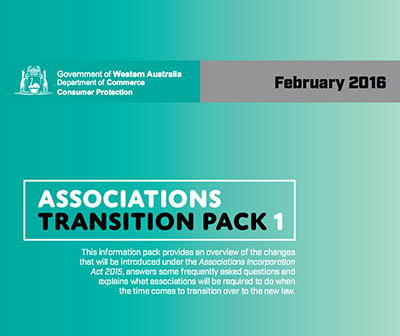