Public Speaking is widely touted as being one of the top three fears that people have. It ranks up there with death of a loved one and terrorist attacks  — and well ahead of clowns.

So why did I join Toastmasters when we first moved to Australia?

Mostly it was to meet new people and to try to form connections, both personally and professionally. But it was also my all-or-nothing go at overcoming the shyness I tended to feel when speaking to strangers.

Right from the first meeting I had to work on overcoming the shaking hands, dry mouth and elevated heart-rate that arrived unfailingly every week – but I kept going. Feedback from people who had no vested interest in anything but my ability to speak in public was tremendously useful. I learned to ensure that my prepared project speeches addressed project criteria succinctly, to pace my delivery, and to be able to respond to impromptu topics or questions even when the subject matter was something I knew nothing about.

Much to my surprise, despite being quietly terrified every single time I stood up to speak, it was fun. The techniques for coping with delivering presentations and managing public speaking-related stress proved invaluable and I carried on going to meetings for a number years.

In due course and after conquering various speech challenges, taking part in competitions and so forth, I eventually moved on to other things – but I wasn’t ready to get rid of my file of prepared speeches and very insightful feedback reports, so I stashed the file in a cupboard for later.

Later happened this weekend. My study was due for a clear out and, in the process of sorting, tidying and binning, I unearthed the file… and had to decide whether to just chuck the whole lot out or to have a look. Predictably, curiosity won out.

Although the content is twenty years old, some of it still resonated — so I thought I might share one or two and see what people think 🙂

This one was my first ‘advanced’ TM speech. Entitled Get Personal, the speech objectives are: (1) to learn the elements of a good story,  and (2) to create and tell and original story based on a personal experience. Time: 6 – 8 minutes.

So: are you sitting comfortably? Then let’s begin… 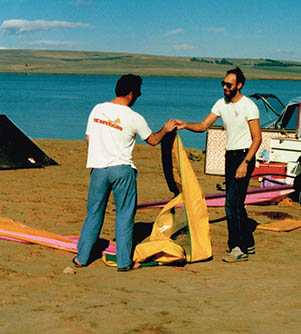 A perfect day. Clear skies, not too hot, and a steady 15-knot wind. What more could a novice windsurfing enthusiast hope for?

In a flurry of enthusiasm I rallied the troops, getting the children organised and hauling my younger brothers (who were staying with us at the time) out of bed. Next I rushed around like a headless chook, packing the car with the essentials: sailboard, picnic and muscle power (the brothers, B & R), then off we went. A day of fun at on the water was less than an hour away…

I’d only been on a windsurfer three or four times before, but I was your archetypal enthusiastic beginner: incredibly keen… but not very competent! I was at that (unfortunate) stage of being able to get a sailboard run with the wind… but turning round and coming back still posed something of a challenge!

After what seemed like an age, we were finally there and unpacked. Once the board was rigged: sail taut, mast secured and fin attached, I dibsed first turn. Squelching out through the muddy shallows, I stepped up onto the board and tipped the sail forward. Ignoring B & R,  who were standing knee-deep in the water behind me chorusing Don’t go too far out! You need to PRACTICE those turns…, I set off across the lake – the wind in my hair, the flies in my teeth, a grin from ear to ear. THIS was freedom! THIS was sheer exhilaration…

After a while I realised just how far I’d gone… oh-oh … time to turn around….
Now, how does it work again??: sail forward? NO! That makes it go faster!
Try sail back? Ooops…… Ka-splosh!

And rinse and repeat, until I couldn’t think coherently past the sound of my heart racing… and tears weren’t far off.

What I didn’t know is that my brothers had been taking a keen interest in my activities, watching anxiously from the shore as I drifted further and further away. After a while it was obvious that I wasn’t going to make it back without help. So they flipped a coin as to who’d stay onshore to keep an eye on the children and who’d get the thankless task of swimming out to rescue me.

By this stage I’d given up to have a rest and was lying full length on the board, shivering, wheezing and oblivious to anything but my own sorry state of affairs. So my surprise and delight when a wet (and slightly abusive) younger brother popped his head over the edge of the board was heartfelt. Hero status immediately awarded!

R – a regular and competent board sailor, effortlessly plucked the sail out of the water, turned the board and headed for shore. I sat on the back of the board like a stranded, bedraggled, miserable mermaid.

And it must have been these thoughts that caused me to move — ever so slightly — and catapult us both back into the water!

Even worse, there was no time to avoid the descending boom. It came flying towards me, hitting me squarely on the bridge of the nose as we exploded off the board.

Panic!
I didn’t know which way was up and had a blinding pain in my head. I kicked desperately, hoping to find the surface. The water was cold and murky, and the weeds seemed to wrap themselves around my legs as I struggled to get away.

Finally my head broke the surface and I drew in a giant breath as I was hauled up onto the board like so much limp washing.

Sit still and put that on your face!
R thrust his wet tee-shirt at me and started paddling frantically for shore. Bemused I put the tee-shirt up to my face, pulled it away and looked at it. It was covered in blood… MY blood.

B had been watching the action from the shore and, with rare anticipation, had grabbed all the picnic gear, flung it in the back of the car and strapped the children into their car seats. Then he raced down to the waters edge to help carry me and the board in.

After that things became somewhat confusing for a while.  The boys rushed me to the emergency ward of the local hospital, where people asked lots of questions that seemed totally irrelevant and got me to sign forms, so many forms, in triplicate.

It turned out that the sharp edge of the boom had made a deep ragged gash across the bridge of my nose and, just to make my day, x-rays showed that the force of the blow had actually also broken my nose. Luckily the break was a clean one and there was no displacement, so my nose didn’t have to be realigned.
Whew.

But I did have to have the obligatory anti-tetanus shot and the gash had to be stitched. The duty doctor injected a local anaesthetic into the wound, which was an eye-wateringly painful experience.  Then the stitching started – and I can only imagine what it would’ve been like without  the local anaesthetic!

By the time I left the hospital a couple of hours later my face had started to swell, my eyes were puffy and looked like I’d gone at least a couple of rounds in the ring with Mike Tyson. Not a pretty sight.

The brothers were very kind. They minded the children, drove me home, made me tea and waited until I was safely settled on my bed with an ice pack on the swelling before saying ‘I told you so!’ in many and different ways. They read big sister the riot act about being irresponsible, which was such a role reversal that it was almost – but not quite – funny.

All of the week that followed, as the swelling gradually went down and the bruises on my face went through all the colours of the rainbow, I thought about what they had said and about what had happened. I felt silly — and my nose hurt A LOT, which re-enforced the silly-feeling. But I was determined it wouldn’t stop me from sailing. I’d learn how to turn that board so that I would never get stuck and have to be rescued again!

So, the next weekend, I was out on the water again – battered and bruised, looking like the walking wounded, practising turn after turn after turn, until I had it just right. Then I was off — flying across the water:  a plume of spray behind me — and a wealth of windsurfing ahead 🙂