The last time I caught up with Sibling#3 in person was in 2011 when we travelled around Scotland and Ireland together. That turned out to be fun, so we decided we’d give it another go. This time we chose a destination a little closer to home (for me, at least): Tasmania.

Starting out in Hobart, we meandered around the island for 10 days. Many kilometres, a good deal of walking, lots of sightseeing and even more talking found us circling back to our starting point. A take-home tip for those considering a similar trip: Tasmania is often wet – then surprisingly sunny – then wet… (and so on), so pack a good quality rain jacket and make sure it’s one that has a hood. You’ll use it!

Our adventures took us to waterfalls, lakes, rocky outcrops, rivers and berry farms. In the first few days we went up Mount Wellington, had breakfast and browsed the stalls at Salamanca Markets, picnicked alongside the historic Richmond Bridge and spent hours viewing the fascinating installations at MONA . 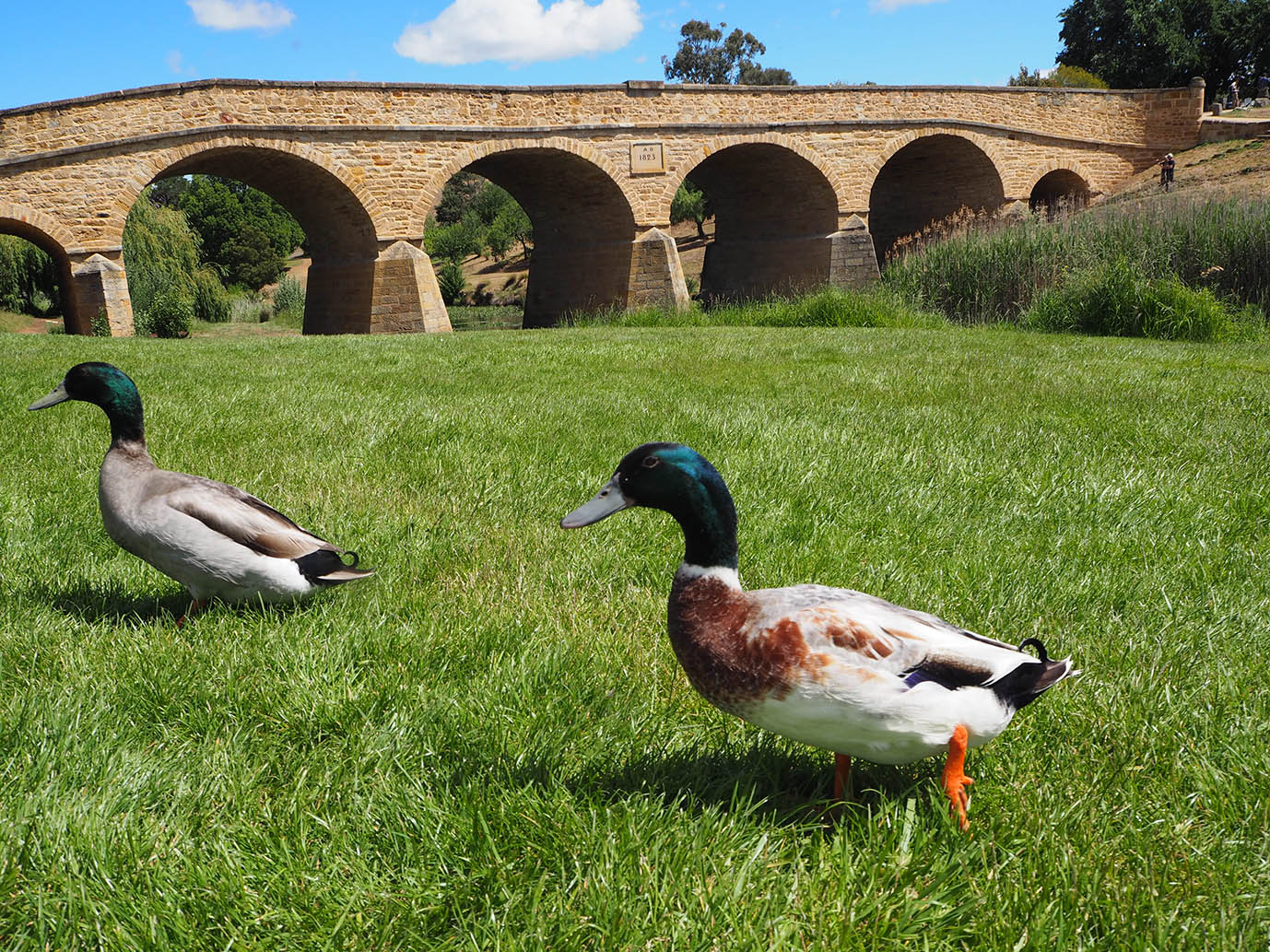 An afternoon at the 69th annual Huon Show was an unexpected addition to the itinerary, but provided plenty of local entertainment. I was particularly taken with the wood chopping competitions, a troupe of very interactive acrobats, an exhilarating demonstration of tent-pegging by the Tasmanian Lighthorse and a variety of livestock displays. Sibling#3 was a little surprised at this spur-of-the-moment agricultural show option, but was happy enough to trudge around in the intermittent drizzle and watch me pat goats and dogs (with some amusement). 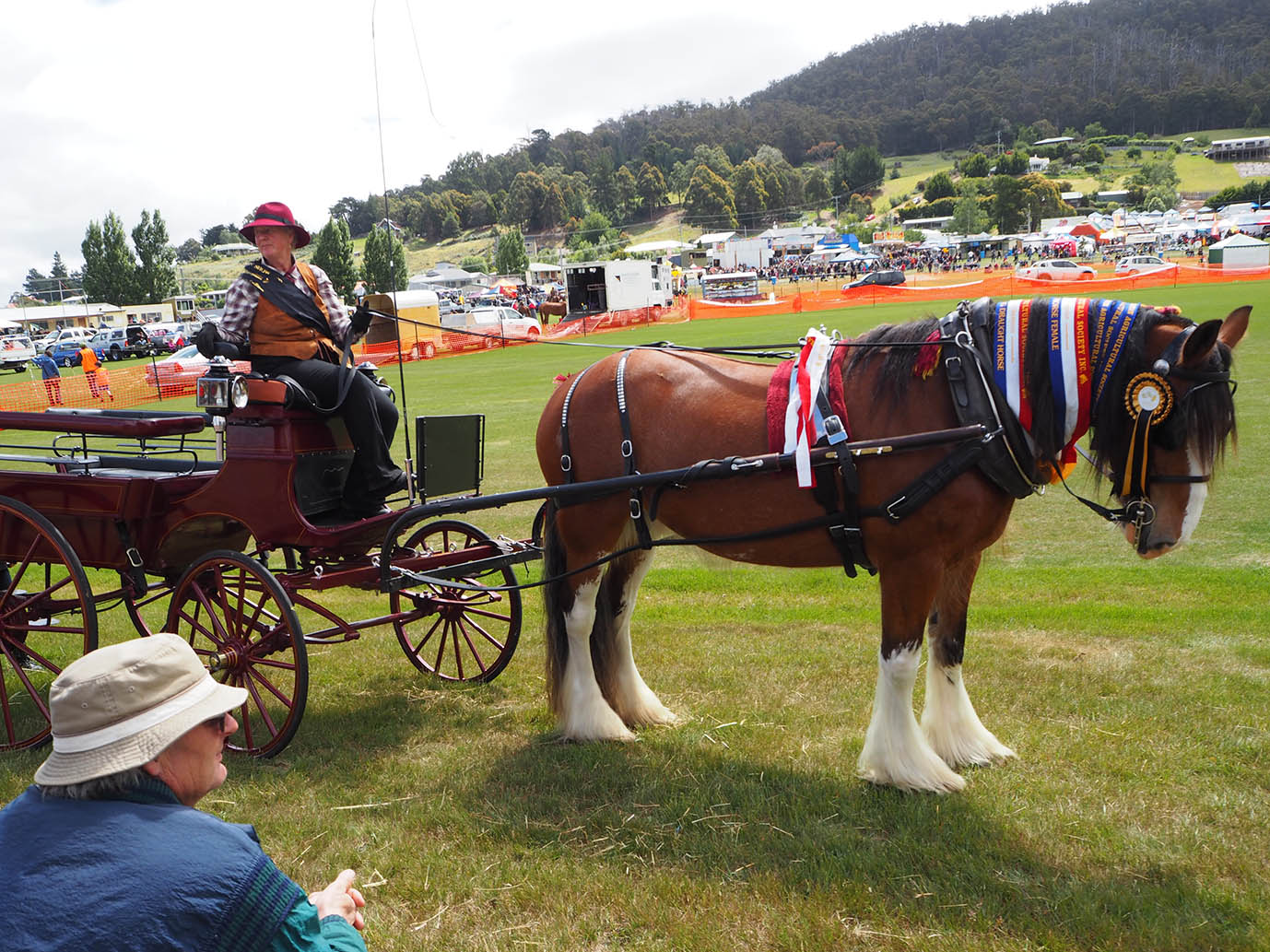 We visited Mount Field National Park, Russell Falls, Queenstown, Strahan, cruised out on the Gordon River, ate delicious (!) chocolate-coated raspberries, went for a walk at Dove Lake (Cradle Mountain) and stayed overnight at Lake St Clair. The last two were particularly interesting as they’re gave me some insights into the 65km Overland Track that family and friends hiked back in 2013. I was impressed at the time, guys, and even more so after being there myself – and realising that you did some of that hike in the snow! 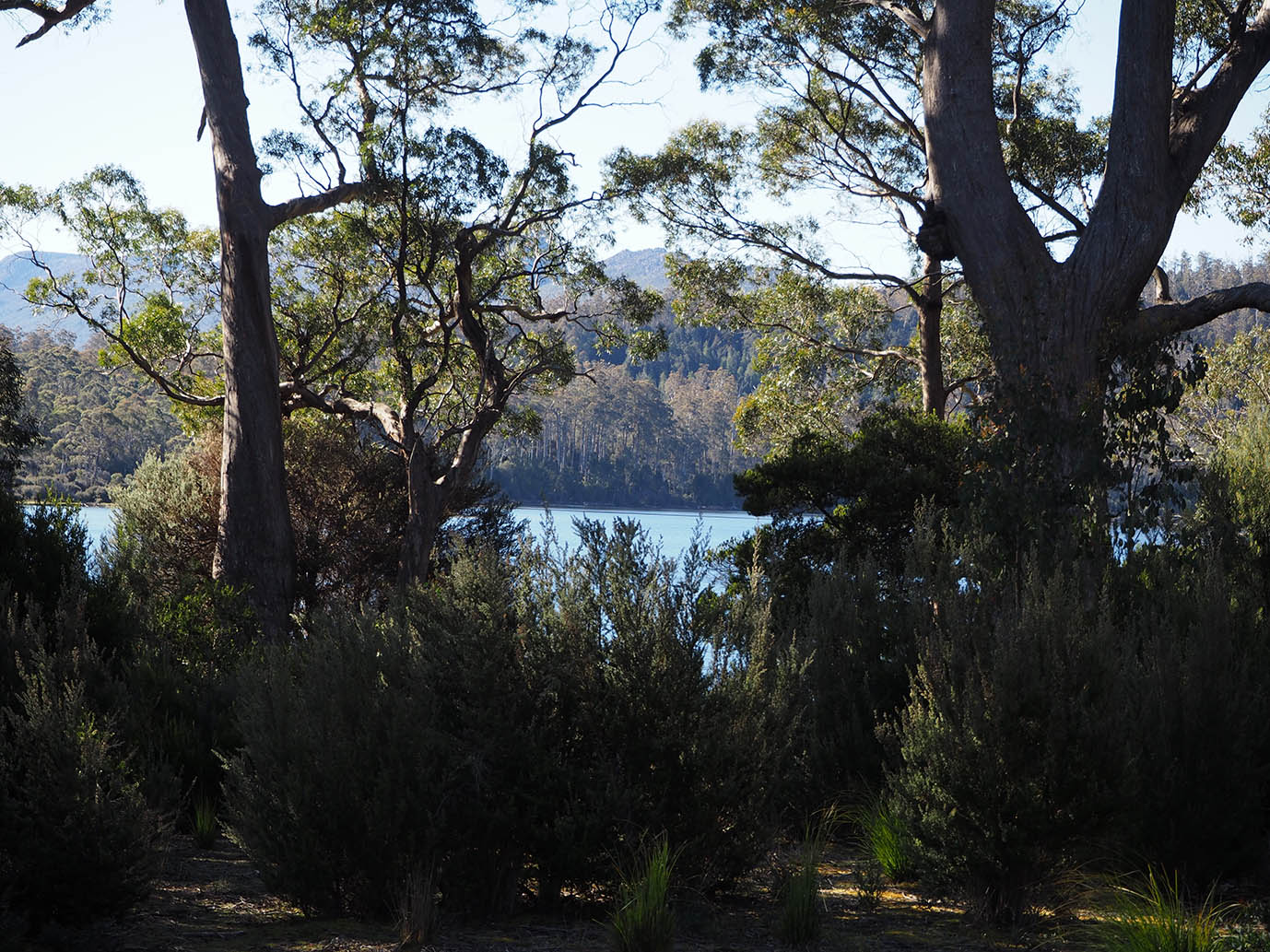 Our final few days took us to Launceston, the Freycinet Peninsula, Swansea, Eaglehawk Neck and Port Arthur before we finally returned to Hobart. Highlights of this section were the vast array of roses at Endelhome Grange and the delicious raspberry pie at Kate’s Berry Farm (after a boat trip out to Wineglass Bay). 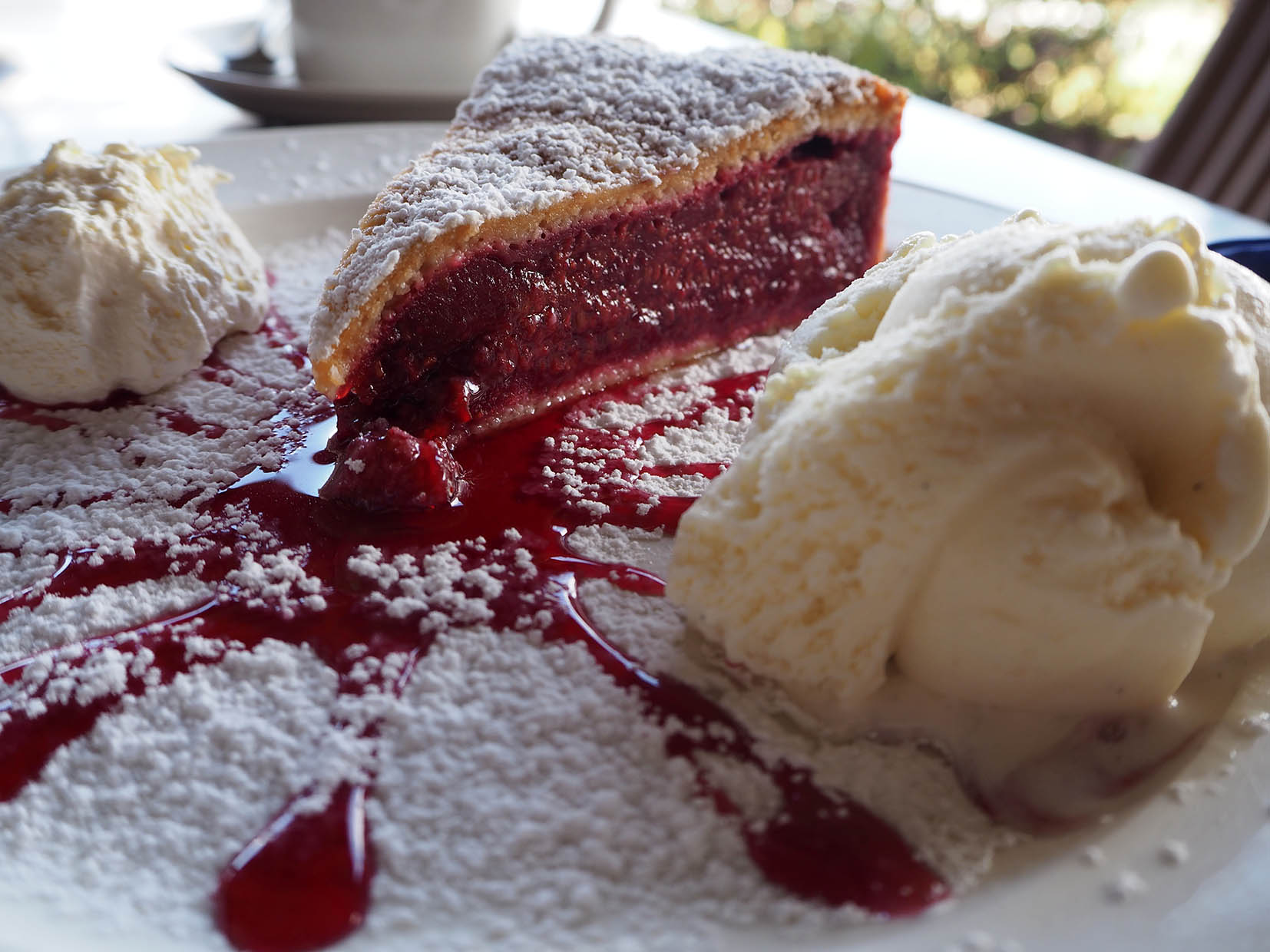 There was a whole lot more to the trip, including our daily hunt for last minute accommodation when we decided it was that time of day. This was occasionally a tad fraught, particularly when Sibling#3’s navigation system (nick-named Susan, for some reason) took us to a number of rather out-of-the way bed-and-breakfast places. A few of these seemed highly implausible – little or no signage and no-one obviously in attendance. A couple of these looked as though they might have potential for duelling banjos in the cowshed – although that may have been the time of day, hunger and tiredness talking. Either way, Sibling#3 and Susan were politely requested to suggest alternatives rather speedily! 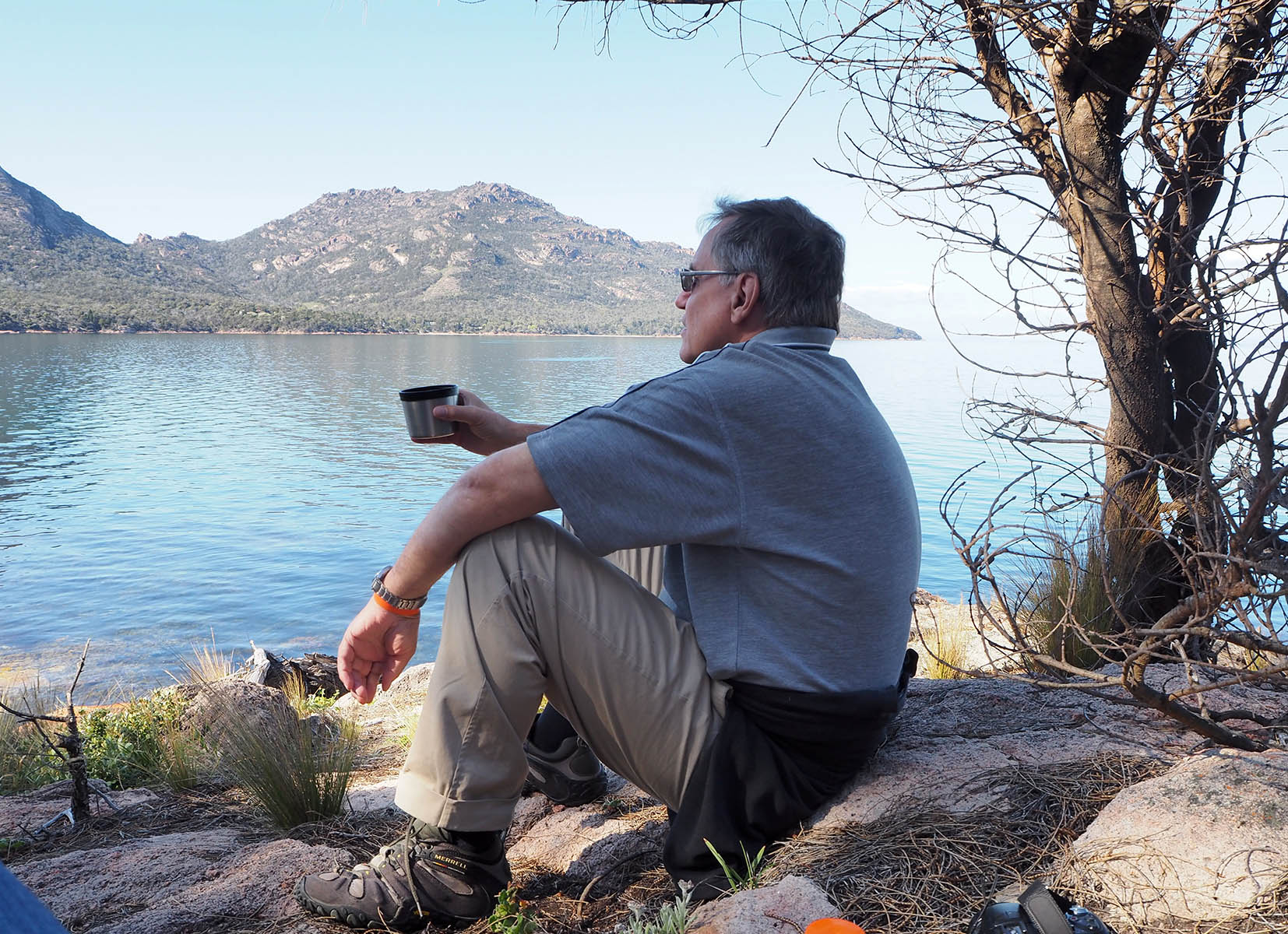 We survived (sometimes despite Susan) and spent a few days together with the rest of the family before Sibling#3 headed home to RSA. I wonder where our next catch-up will be…

One thought on “Holiday snapshots”