Having completed puppy school last month, we enrolled Cassie in the beginners obedience classes at the Southern River Dog Club for the next step. The class is quite large (about 30 dogs), so it’s demonstration/instruction-based for the most part and there’s not a lot of individual attention. But that’s okay, since the class is as much about exposing Cassie to lots of dogs and people as anything else – and our young lady is already up to speed with a few commands (sit, wait, leave, come) and walks happily (albeit a little too enthusiastically!) on lead. So class one was mostly about Himself and Cassie familiarising themselves with clicker training.

The only gotcha of the evening was that the trainers had requested that we bring along a training-specific toy. They suggested something along the lines of a simple tug-toy that was to be used at dog school – not at home. Since we hadn’t bought one – and pet stores were closed by the time we realised this – we had to come up with a last minute cunning plan.

Himself described what he was after: a woven or plaited fabric rope, soft enough to not hurt Cassie’s mouth but sturdy enough to withstand her piranha-teeth. So, with precious little time to spare, I hunted through my fabric scraps and found a narrow strip of fleece that looked like it might work. Step one was to cut it into strips… but then we were faced with the problem of how to turn those into some semblance of a tug-toy. This is about when I had a Eureka! moment…

I remembered a knotting craft that was all the rage when my own kids were at primary school:  Scoubidou (Scooby-do). It’s a cheap, colourful, useful and, above all, quick and easy way of creating a woven item. To minimise craft-talk confusion, I hunted down a simple instructional video and Himself got to weaving. Since the fabric scraps I’d scrounged up weren’t very long, the toy turned out a little shorter than we’d hoped – but it was well and truly ready in time for school. A recycling win – both the fabric and the weaving method 🙂

Yesterday I took it one step further. I scrounged through the bargain bin at our local fabric store and, for the princely sum of $8, acquired a couple of pieces of fleece fabric offcuts. Next was a quick interwebs search to see if anyone else had ever made such scoubidou-style fleece tug-toy.

I was astonished to find that not only have (many) others made similar toys, many of those crafty-folk have shared their techniques on blogs and in videos. I perused a couple and then, Scoubi-muscle-memory refreshed, I knocked up two slightly longer, snazzy-looking tug-toys whilst watching TV last night. 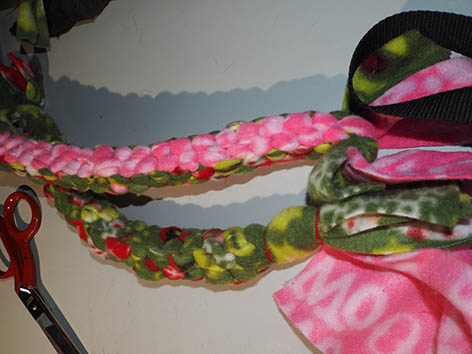 If you’d like to try one yourself, this is what I’d suggest: 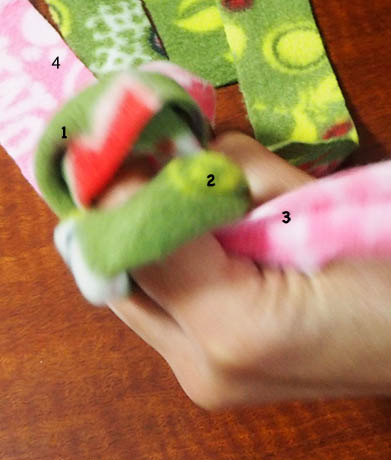 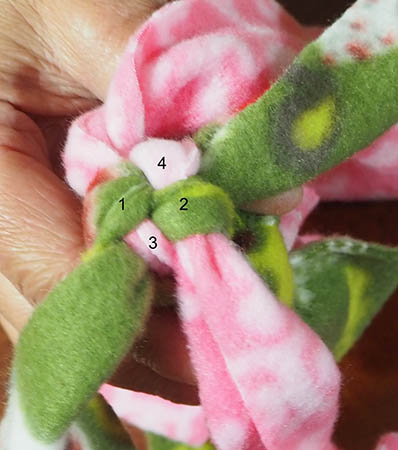 Of course, if you don’t want to make one you could just ask me to knock one up for you… especially if you already have some suitable fabric. Although, since I only used a very small amount of the fleece I bought, I’d be happy to use that up 🙂