With a pair of toddlers (otherwise known as puppies, 18 months and 3 months old respectively) at home, I’ve been thrown back into the deep-end of stay-at-home-mum life. The gaps between feeding them, playing with them, walking them, cleaning up behind them, making sure they don’t chew anything important or squish each other (one weighs 25kg, the other 5kg!) are few and far between.

Puppies are fun, no doubt about it, but this stage does remind me of when my human children were small. When they finally conk out for a nap it comes as a welcome break, but it’s also quite regularly when my brain starts reminding me about the restless nights monitoring said children/pups. Sleeeep, it says, sleeeeep nowwwwww…

With the children, well meaning friends and relatives – even strangers – would tell me, ‘Nap when the babies nap. Make the most of your time.’ After a while I started to wonder whether they all had home help. Or perhaps they had a secret supply of magical wee folk lurking in the background, ready to do all the nasty accumulated chores in exchange for small gifts of food…

In the absence of magical or other help, and with catch-up-sleep the stuff of daydreams, I nevertheless learned that it was possible to chunk away at various tasks while the babies napped – sometimes even while they entertained themselves for brief periods.

Similarly, the first few weeks with the two dogs together have been pretty full on. House-training a new pup takes determination and vigilance, also a goodly supply of paper towel and a bottle of clean-up spray. We’re getting there and, in some ways, it’s no worse than potty training. If anything, it’s easier as it’s taking far less time. Nunzio/Cassie’s conquered the doggy door and now usually makes it to the lawn in time (and there was great rejoicing!).

As with any toddlers, playtime can be a tad fraught – although Molly has been surprisingly patient and it’s suddenly clear just how much she’s matured over the past few months. However, the puppy has an endless supply of nippy little teeth and a good deal of persistence, and patience definitely has its limits. The trick is to leave them to it and to intervene/distract just before drama happens. That way some learning happens, but she doesn’t get chased and stomped on too badly. This too shall pass – Molly’s coping and her Nunzio’s getting bigger and less squishable each week. 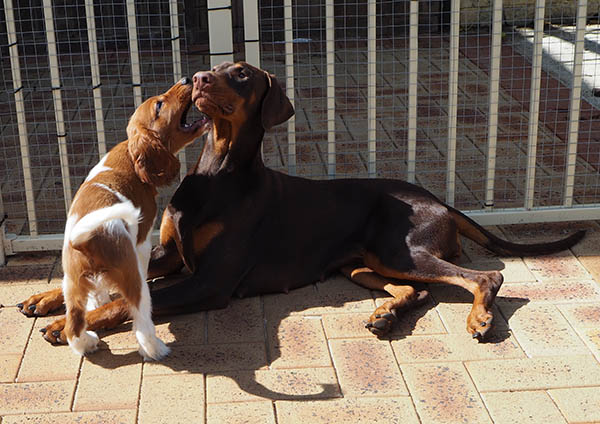 Meantime, I fit writing in where I can, conquer the household chores where possible and – today, after a certain amount of procrastination, have finally started my chicken-piñata. This has already entailed a certain amount excitement. The first balloon I inflated exploded – making both dogs duck for cover and me dive for the remains before either of them could decide they were edible! Later, the second balloon – now part-covered with strips of soggy papier mâché – got knocked off it’s stand and fell on Molly’s head, pretty much confirming her notion that balloons are très dangereux 🙂 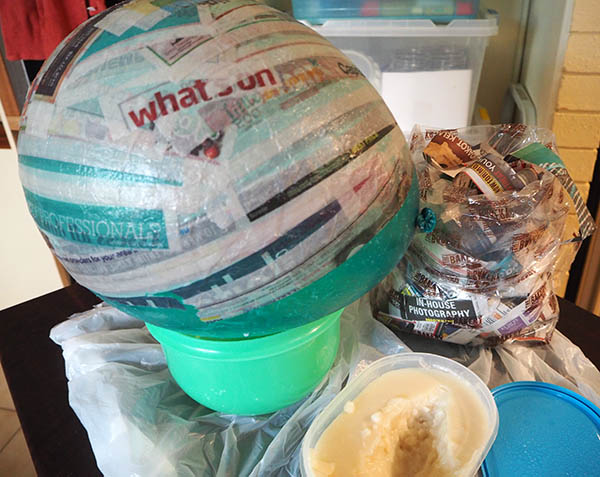 Piñatas take about 50 hours to create, from start to finish, depending on how large and how complicated you decide to make them. The process is done in stages to allow the layers of papier mâché to dry, which is just as well since nap times are fairly brief. I’m 3 hours in, having made the glue, torn up some newspaper and started to apply the first layer. With luck, by the time I have this piñata completed we should be through the worst of the toddler stage… 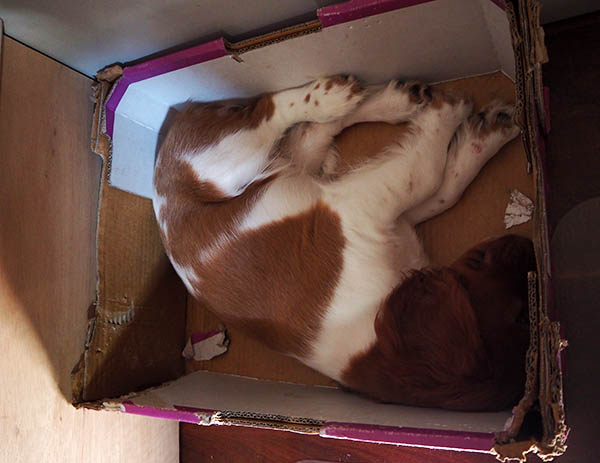 It shouldn’t come as a surprise that parenting – whether of human children or of furbabies – doesn’t get easier with time, it just changes. Even so, each new parenting drama rolls over us like a ton of bricks, leaving us sleep deprived and stressed.

Her body language said, Look, I’ve got a thing – it’s naughty – it’s mine and you won’t want me to eat it… but I will! Go on, I dare you to try stopping me.

When I went out the door – slowly, calmly, and armed with a treat-bribe – she retreated a few more steps, dropped her precious between her feet again, looked at me, then snatched it off the ground and gulped it down!

Aargh! Pounce, muzzle open, fingers down throat – but it was gone. Completely. And she was as pleased as punch – she’d eaten her precious treasure and received attention. So much win.

I started trying to figure out what she could possibly have nabbed from the kitchen area. It had to be something she knew she shouldn’t have and – no matter how careful we try to be – it could plausibly be something that could cause her harm. I’d been making tea. Could I have dropped a teabag? She’d tried (unsuccessfully) to run off with one of those before, so it wasn’t implausible.

Rather panicked Internet research ensued, the spectre of caffeine poisoning looming large. But everything I read on animal poison sites indicated that a single teabag was highly unlikely to cause a problem for a 25kg dog. Unless, of course, the tag was stapled onto the teabag. Aargh. Teabag research in kitchen proved that although the bags do have labels this time around, they’re glued. Whew.

Standard protocol indicated that monitoring the dog for the side effects of caffeine poisoning over the next couple of hours was the next step. The symptoms include severe hyperactivity, restlessness, vomiting, elevated heart rate – and a range of more complex issues from there on. I watched. I monitored. I lurked and stressed and waited. Nothing. She seemed perfectly fine. She shared the puppy’s lunch. We played fetch. They had a nap together.

Then, six hours after the great-gulping-event, I heard the sounds of retching and rushed outside in time to see her vomit on the doorstep. Not a teabag though; what she brought up was a sachet of desiccant. I assume it must’ve fallen out of the open box of mochi in the fridge when I put the milk away. I didn’t see it fall – but she obviously did and swooped to retrieve it as soon as I moved away from the fridge.

After cleaning up the mess and putting the remains of the now perforated packet of desiccant into a container for reference, I headed back to the computer and the dog poison sites. Unfortunately, what she’d eaten wasn’t something simple and relatively harmless, like silica gel. It was a sachet of O-Buster, a desiccant that is 50-70% total iron and potentially highly toxic. No good, so the next step was to hightail it off to the vet, armed with both the dog and the remains of the packet of O-Buster.

Although  the desiccant packaging was perforated – and some of the contents will certainly have gone into her system, most of the packet appeared to have been regurgitated. That, the vet said, is a plus. The fact that she’s a big dog and the risk level is at the 20-60mg/kg level is another plus. With the packet largely intact, the vet considered it unlikely that she’d ingested much. On examination, Molly’s vitals were all fine, temperature normal, etc. The vet took some blood to send off for iron analysis overnight. The results will clarify as to whether chelation therapy – the administration of deferoxamine intravenously – wouldbe required.  Yikes – especially since the therapy itself has a number of questionable outcomes.

The vet told us to take her home and – yes – monitor her. She’d phone us as soon as the test results came in, hopefully first thing in the morning. Later that evening, just to add a little more fun to the evening, she phoned to tell us she’d spoken to a poisons expert about Molly. They’d agreed that it would be good idea admisiter 5-10ml of Milk of Magnesia (magnesium hydroxide) as a prophylactic measure as it might help to reduce the amount of iron her body would absorb.

Ah yes, Milk of Magnesia. I remembered it with some distaste from my childhood; it’s a particularly nasty-tasting white goop that was occasionally administered by my mother for ailments such as constipation (internally) and sunburn (externally). It used to be a bog-standard, over-the-counter medication that was found in most households when I was a kid.

However, several late night pharmacy and supermarket visits, followed by yet more Internet research, showed that MoM is no longer available as a commercial product in Australia and that there is no direct equivalent. As it was now after hours at our local vet, a phone call to the emergency vet ensued. She was aware of the situtation – was possibly even the person our vet had spoken to – and said that the MoM would be unlikely to make a difference anyway, so it would be best to – yup – continue to monitor her overnight.

Despite a restless night none of the symptoms (bloody stools, vomiting, depressed behaviour, abdominal pain) showed up, which was a relief. The vet rang at 4pm today (after several calls from me to check on progress) to let us know that the results were finally in and that Molly’s iron levels are 36 (on a magical scale of 15 – 41.7), so she should be fine.

The girls are outside having fun together and our stress levels slowly ebbing. Was it just yesterday – shortly before all this happened – that I was researching pet insurance just in case something untoward happened? Thank you, Murphy. 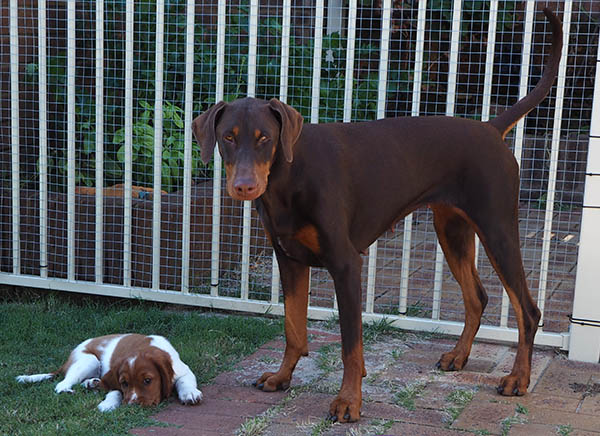