We did a good thing

So many charitable organisations these days want detailed information from donors. This, of course, is so that they can encourage people to become repeat donors, to buy lottery tickets, to sponsor and support – on their terms.

In many cases, however, this ploy often has a negative effect on those self same donors. Many kind and helpful people end up with donor fatigue. We feel taken advantage of or harassed and many of us opt out of donating at all. But the thing is that many of us aren’t necessarily tired of donating or helping. In fact we’d love to.

But how do we help? Where can we give on our own terms, rather than on those imposed on us by one or other organization?

With Christmas on the horizon, I was thinking about all this quite a lot. Then, a few weeks ago, I found out about Manna’s Hampers for the Homeless initiative. It spoke directly to my ongoing concern that not everyone gets to eat every day, even in Australia.

The idea of providing some basic necessities for people in need had enormous appeal. So I put the suggestion out, asking people I know – and people they know – to consider stepping up and helping out, at whatever level they were comfortable with.

Donations started to arrive on our doorstep a few days later and soon my study was overflowing with tins of baked beans and tuna, with toothpaste, biscuits, lollies and more. I’ve been both humbled and overwhelmed by the response.

Thank you. Thank you for letting me know how this has impacted on each of you. I agree that the stark contrast to our far more privileged lives is sobering – and the realization that our contributions will make a real difference to people’s lives is indeed heart-warming,

I thought you’d like to know that we surpassed our arbitrarily chosen target for donations by a goodly margin. Between us we gathered 15 complete hampers, as well as some carry-over items. Lolo Caseiro, the Kitchen Manager at Manna, and her son Kai helped me unload the boxes when I delivered them to the depot this morning. They were delighted with everything and assured me that it would all be used. They’ll be distributing 300 hampers to the homeless of Perth close to or on Christmas Day and our contributions will be included.

We did a good thing, folks. 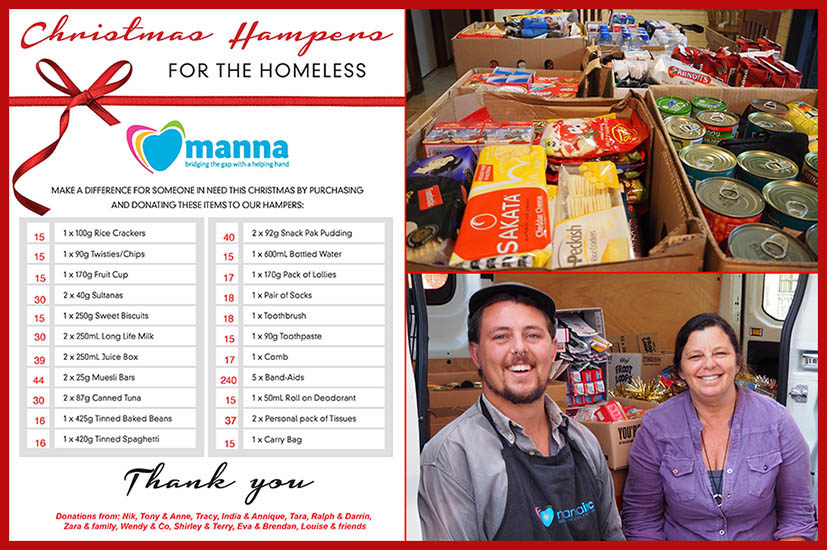 Lolo and Kai at Manna with our hamper contributions.