I always thought French food must be singularly unhealthy. After all, it seems to use an awful lot of butter and cream – and to be rather heavy-handed on the weird ingredient front (frogs legs, duck fat, blue cheeses and suchlike).

But then I watched a video countdown of the best diets in the world. Screened on SBS last week, the rather perky presenters (Kate Quilton & Jimmy Doherty) showcased typical weekly food shopping and family meals in 50 countries around the globe.

Iceland came out on top overall. They have a really clean environment, eat loads of fish and a dairy product called skyr – which sounds rather like yoghurt, but is exceptionally low in fat and high in calcium and protein. Italy, with its Mediterranean diet (my favourite), came in at second place; the Marshall Islands (in the South Pacific), with its high levels of type 2 diabetes, came in last.

My understanding of French food as inherently unhealthy led me to anticipate that France would be somewhere down the bottom of the list too. Not so. In fact the French seem to have a significantly healthier lifestyle than we do here in Australia. Not what I’d have expected, given our abundance of sunshine, fresh produce, sunshine and enthusiasm for outdoor living. But there you go: we ranked 38/50, whereas France came up as very commendable 8/50!

Since I’m generally pretty suspicious of information presented on TV, I hunted around for some more data on the pros and cons of French food. I found some commentary on high levels of saturated fat and possible under-reporting of coronary heart disease related deaths, but the bulk of what I found supported the notion that the French lifestyle is a positive one.

A recent good food study conducted by Oxfam concluded the same thing. It ranked 125 countries according to the quality of their food, its affordability and availability – and on the prevalence of diet-related health issues. On this food index, Australia was ranked eighth – with the race to the bottom won by Chad. France came in at second place. 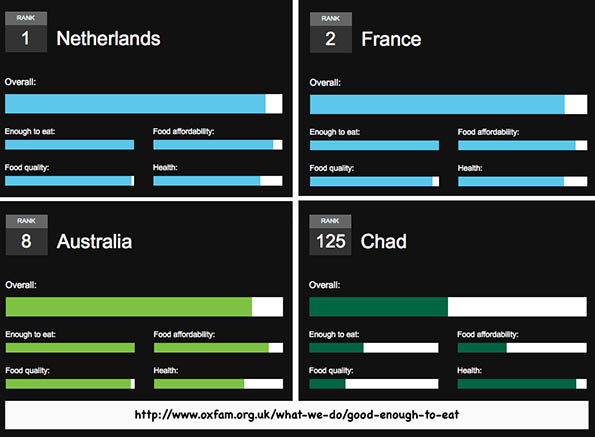 Whilst this was interesting, it didn’t tell me what the French are doing that we’re not. As author Mireille Guiliano asks: “…they eat as they like and they don’t get fat. Porquoi?”

Why is it so, indeed? Considering that key ingredients of French food include butter, speck, duck fat and cheese, it sounds implausible. What is it about the French diet and lifestyle that has resulted in France being relatively high on the preferred diet list and low on the international overweight index?

Well, firstly, it’s very flavoursome food. It’s also very filling – which makes it easier to be mindful of what you eat and to not overindulge. They also tend not to snack between meals and to include walking as part of their lifestyle. Add to this that the French have traditionally made an art out of food preparation and eating. It’s something they take seriously, finding pleasure in relaxing over their meals rather than rushing through them or eating them on autopilot whilst busy with other things – in the car, at work, or in front of the TV/computer.

The past couple of decades has, however, seen this lifestyle starting to fall foul of la restauration rapide épidémie (the fast food epidemic). According to some research, this shift is resulting in a reduction in the number of people maintaining the tradition of two or three sit down meals a day. Even so, it seems the French are still getting things more right than not, with the average body mass index remaining pretty much the same over the past 40 years.

So where to from here for our household? My take-home message from all this was to try to make our lifestyle a little more French, whilst retaining key elements of my favourite eating style (the Mediterranean diet). My new plan is to get retro: go back to taking time to plan the meals for the week, increase our fish and blue cheese (!) intake, use lots of veggies every day and exile fast food / ready meals / snacks (for the most part).

With this in mind, I conducted a mini-audit of our fridge/freezer and pantry yesterday and found a preponderance of fresh food (yoghurt, cheese, eggs, fruit and veg), as well as tinned/dry staples (tuna, lentils, rice, pasta). It looks like my plan won’t really result in much extra shopping – or in that much of a lifestyle change – although cutting back on red meat and eating more fish probably won’t sit too well with the meatosaurus of the family. Perhaps he won’t notice if I wear a beret when I’m cooking… he’ll be too busy laughing 🙂

How about you? What’s your favourite food style?

2 thoughts on “The food paradox”