by nikmacd ⋅ 4 Comments ⋅ Aside 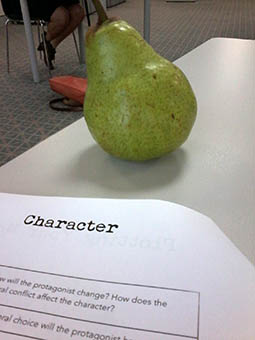 g in NaNoWriMo a number of times, but life has conveniently provided me with an ongoing multitude of excuses not to. But what all those excuses actually boil down to is that producing 50,000 words in 30 days simply sounds wayyyy too daunting to consider.

Then, a couple of weeks ago a friend sent me a message on Twitter: Hello! are you gonna #nanowrimo this year?

Bold writer that she is, she gave it a go in 2015 and reached her 50,000 word target on 30 November – the deadline. At the time I think I said something along the lines of  ‘Well done! I should’ve signed up too… maybe next year…’

But that was then and this is now… So sensible-me reply-tweeted: Heh – I think not. My greycells are still pulpy after #BlogJune, and that’s a much less intense project!

When we caught up for coffee and cake the following week, we talked about writing and plans and life – as usual – and she asked another curly question: Are you planning on writing another book?

My answer was much the same as the one to the NaNoWriMo question, but with more detailed excuses. In essence, I told her, I’m not sure I have either the subject matter or the commitment to launch into another big project.

As it turns out, the cosmos seems to have other plans…

This became clear a few days later when one of my favourite local librarians suggested I might like to attend a NaNoWrimo information evening. Just come along, she said. It’s part of the combined libraries Write Along the Highway programme and the first time we’ve been involved.

So I went – mostly as a gesture of solidarity and support but also because I was jut a little curious.

Somehow or other, for reasons still not quite clear to me, by the end of the session I found myself agreeing to jump on board the NaNo-wave. Of it’s own volition, my hand had sneaked up in answer to the question: So who’s gonna sign up to participate in NaNoWriMo this year?

How did that even happen!? 😛

I guess my subconscious decided that since I work best under pressure (even if it’s self-imposed), it would provide me with some. Senisible-me is still kicking and screaming about it a bit, but she and my subconscious are slowly coming to an accommodation.

Since I also attended a (free) introduction to Scrivener at one of the libraries, perhaps I’ll try Scrivener-ing my way through November. The presenter, Natasha Lester, calls it ‘the best writing tool on the market‘ and her enthusiasm was very infectious… and I have had a copy of Scrivener sitting around for the last many months…

In short, I’m in. Although, as you may have gleaned, I’m both looking forward to and dreading 1 November. My goal is to reach the finish line with ta (very) rought first draft of an actual book. Then I can dither, procrastinate and deliberate over that for a number of more relaxing months. It certainly beats dithering over whether to start in the first place!