As I worked through my exercise routine at the hydrotherapy pool yesterday, it occurred to me just how fortunate I am. This was probably spurred on by the presence of two young cerebral palsy patients, each with two carers assisting them in the pool. As I walked and cycled and did the rest of my exercises (unaided), I thought about how easy it is to whinge rather than to take stock of just how rich one’s life actually is. This then led me to consider when last I’d consciously enjoyed my week. The short answer was ‘this week’ – seven days of random things, excluding paid work. So here’s what I’ve been up to lately…

Weather guarding the fruit trees. This involved some compost, a lot of mulch and hard work. The first step was to lower the level of the garden bed in our mini orchard by about 15cm. Whilst that may not sound like much, I have many bags of sand that testify otherwise! There simply isn’t an easy way to get rid of sand when there isn’t ready access for a bobcat or other doggy-machine to do the work for you. It comes down to a shovel, determination and time. Once I’d finally reached the desired level (after 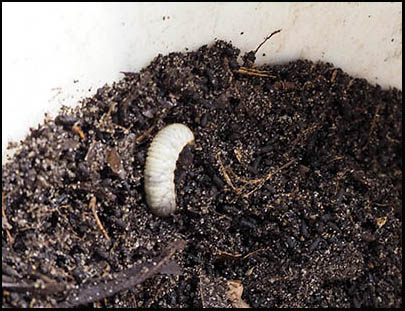 much digging and bagging of sand), I decided it would be a good idea to add a little compost to enrich the area and to make up for having removed most of the topsoil.

This also sounds simpler than it actually was. It turned out that our compost bin was ‘enriched’ by a large number of creepy-looking mole cricket larvae. How the devil they got in there is a mystery, but I know exactly how they got out… I donned the gloves-of-protection, sifted through the compost – by hand – and removed them, one grub at a time. By the time I finished I was decidedly grossed out and very much in need of a shower to get rid of (mostly imaginary) bug residue. Himself very kindly took on the task of spreading the compost and then topping it with a thick layer of mulch. The trees look happy and we’re hoping they’ll have an easier time of it through the February heat.

Socialising. Finding time to spend with friends often falls foul of busy schedules. I’ve found that a way round this is to book what are, in effect, ‘play dates’. These can be lunch/dinner, a walk, coffee, a movie – any excuse to ensure that we can get together to catch up on nothing and everything rather than gradually losing contact. This week I went to a movie with friends, had people round to our place a few times and enjoyed a couple of hours catching up with a good friend over bagels, waffles and coffee. I did wonder whether being an informal DryAthlon participant this January would impact my social life – but it’s made no difference at all.

Harvest. In a moment of crazy late last year I planted out 12 basil seedlings. It was really for some fresh greenery in the garden at Xmas time, but I didn’t expect many of them to all survive the heat. They did. They all did. So this week was the first great basil harvest and pesto making adventure. The house smelled delicious and my freezer is now full of little boxes of pesto for later in the season when the plants have died back. I also took the time to strip our ruby blood plum tree – and to eat a goodly number of the plums. Not a huge harvest this year, so I won’t be making any plum jam – but I’m okay with that since we still have a LOT of various jams in stock from past harvests.

Convention wrap-up. As part of the organising committee for the 15th (very successful) GenghisCon, it was good to share the highlights with the rest of the crew at the final meeting this week. We also spent some time brainstorming as to how we can make the planning phase easier for the 2016/17 committee. Cunning plans are afoot. 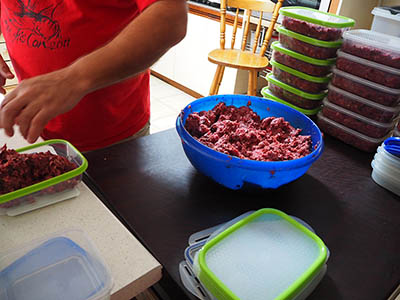 local meat markets on Saturday resulted in the purchase of 10 ox hearts, 2 ox livers and 18kg of beef mince. Later in the day the household vibrated to the sounds of the mixmaster with its mincer attachment going full tilt. Hearts are no problem – the flesh is very firm and easy to cut up and feed through the mincer. Livers, however, are slippery little devils and mince out to a meaty goo that’s seriously visually unappealing. (Just thought I’d share that visual image).

Our pet fud recipe is: 2 hearts, 1 liver, 10kg mince, 1.5kg sardines in oil – mix together (wear gloves!), then weigh out into 600g lots and freeze. Our pup currently gets 300g of this mix each day, along with her (soaked) biscuits and whatever veggies I have to hand. She’s loving it and the meat component costs us less than $2 a day. This time round we processed 105 meals, so it’ll be a while before we need to head back to the markets. Well worth the early morning and a couple of hours of production. Win.

(The rest of the meat was for DaughterDearest to turn into catfud – the process is essentially the same, but with the addition of various cat-specific dietary supplements.)

Veggies. A friend and I take it in turn to go to the wholesale veggie markets every 3 weeks or so. This wasn’t my week on, so I had the pleasure of having three boxes filled to overflowing delivered to the door. Our fridge is now pretty well stocked with delicious fruit and veg that will keep us going for the next couple of weeks. Happiness.

Having reviewed all that, it occurs to me that it’s often only by comparison (to the plight of others) that we appreciate the richness of our own lives, that we realise the value of our abilities and the strength of our relationships. Surely this isn’t best practise? Perhaps being more conscious of these things in the here-and-now, mindfully rather than habitually, could be a useful goal to strive towards this year.

3 thoughts on “Seven days in Perth”