It’s always deeply satisfying to make tasty things for my family (and pets), and this week is no exception.

With Cassie and Molly both at school this term, we’re going through a prodigious amount of puppy training treats. This week I’m trying out something new: Tuna Fudge. I found the recipe on the dog club’s website and thought it would provide some variation for the (not at all picky) dogs. It’s a much less messy and time consuming option than the liver treats I made a couple of weeks ago, so I may stick to these for a while. I did change the recipe slightly, using one cup of plain flour + (about) ¾ of a cup of polenta (corn meal) in place of the wholemeal flour.  The dogs approve 🙂 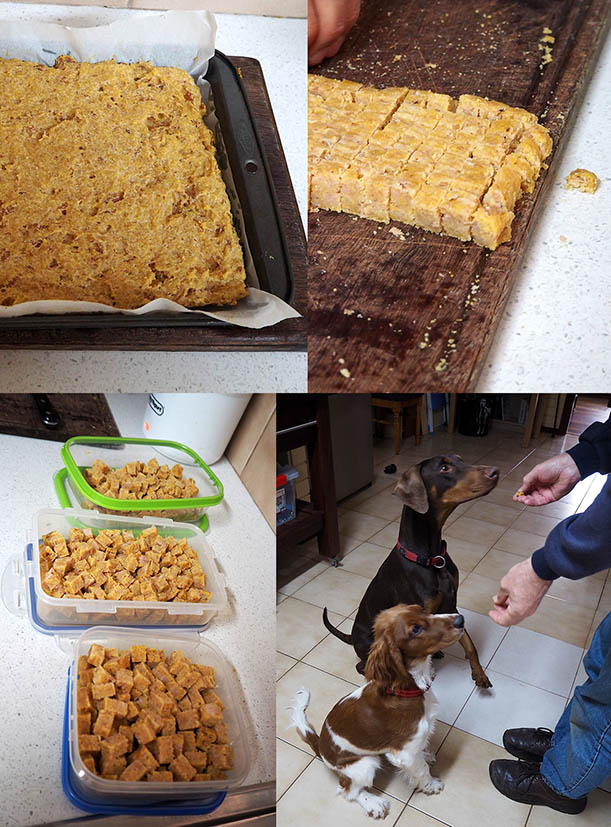 While the training treats were baking, I did the final preparation of some Rosemary Seasalt Dutch Oven Bread for our lunch. I mixed up the dough yesterday, using ½ a cup of my excess sourdough starter in place of the suggested amount of active dry yeast. This may be what resulted in the bread not rising a whole lot (and thus turning out pretty dense), but the crust was absolutely delicious!

I’ll do some research into getting the quantity of starter right, but will definitely make it again. So much yum – particularly on a blustery winters day. There’s not a lot out there to beat freshly made (hot) bread with lashing of butter!

What I need now is a really great chicken and corn soup recipe to try out as an accompaniment… Any suggestions?