My best friend flew up from Brownies to Guides when we were about 11 years old. I wasn’t a fan of Brownies – the one time I went along they’d seemed to spend all their time doing what I considered frightfully ‘girlie’ things. Guides, on the other hand, apparently went camping and did lots of outdoor activities, which all sounded much more fun. So I joined up. The only downside turned out to be that I had to polish my shoes on Friday afternoons before going to meetings, but I soon learned to offset that by not polishing them on Friday mornings before school 🙂

In no time I’d mastered reef knots, sheet bends and that most useful of knots, the bowline.  I learned basic first aid and was taught how to raise, lower and fold a flag. We did indeed go camping and we also played endless variations of Kim’s game. In the version we played, 24 different objects were placed on a tray and covered with a cloth. The items were then revealed to the player for a limited time, say one minute, after which they were covered up again and the player was asked to list as many as s/he could remember. It was fun – and good training in observation and recollection.  We also learned what has turned out to be a most useful skill, namely Scout’s pace – a method of covering distance fairly quickly by alternating running and walking 50 paces. This gives one time to recover somewhat in-between bursts of running and is much more fun that jogging or running flat out!

One of the most interesting aspects of my time as a Guide was getting involved in the international pen pal scheme. Our troop established contact with a troop in Canada and a few of us started corresponding with girls of similar ages in Toronto. This wasn’t my first encounter with correspondence, as my sister was living in Angola at the time and I would occasionally exchange postcards with her. In both cases I learned a little about how and where other people lived and, as importantly, started to write for pleasure.

In later years, I began to keep journals, corresponded with friends via snail mail and email, wrote a lengthy work of narrative non-fiction and, more recently, a memoir. Last year I job-shared for a while and ended up with my other half (of the job share) as an office pen pal. We left descriptive and informative notes for each other so that we would both know what needed to be done. It was surprisingly entertaining and I found that I missed that more than any other part of the job when I left.

All of these writing experiences have been influenced by those early pen pal days, by learning how to express myself in ways that a reader might find interesting. I was therefore delighted to receive a card in the mail a few weeks ago, sent to me by a friend who also lives here in Perth. She chose to post a physical card rather than send an email or a text message. It was a lovely surprise, as was the follow up package I received a couple of weeks later. This contained an eclectic range of goodies, from a vintage magazine to a beautiful drawing of a teacup. The magazine includes a pattern for a knitted poncho and a recipe for a no-bake Pavlova. Win!

I’ve sent a physical reply (in the mail) – and have created this to augment it. Enjoy, dear Pen Pal 🙂 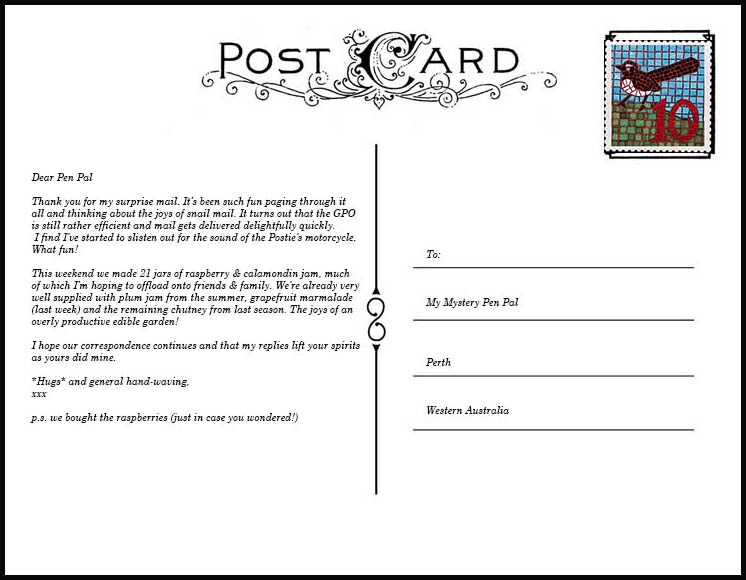