With September nearly over and summer on the way, kite-flying season is well and truly here. Spring days in Perth tend to trend towards being reasonably dry and sunny, yet also moderately breezy – perfect weather for kite fans, however inexperienced, to have some fun.

Back in the day my younger brother and I used to get stuck in and build traditional diamond shaped kites every year, utilising dowel sticks, crepe paper, newspaper, string and glue. In the end we probably spent a great deal more time building the kites than we ever did flying them, but it was all part of the fun. The trick was to have a long enough tail and to be prepared to run around like crazy until lift-off was achieved. Then it was a matter of seeing who’s kite stayed up the longest, went the highest and crashed most spectacularly. 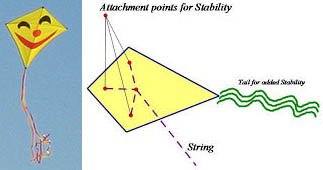 From that basic diamond shape we moved on to box kites, but these proved to be a great deal more challenging and less rewarding overall and were soon abandoned. The next iteration of kite manufacturing was hexagon-shaped kites, which worked remarkably well. By that stage we’d learned quite a lot about making each unit as light as possible and had started to cut up large garbage bags for the kite skins, in preference to the very heavy crepe paper we’d used in the past. Tissue paper made a brief showing, but generally proved to be far too flimsy. We’d also learned about adjusting the position of the tow point and bridle lines to make the kites fly most effectively – and with less running!

In due course we each had children of our own and they in turn wanted to make kites and fly them. So it was back to the drawing board, followed by construction and yet more running around with kites – and handlers – of variable skill levels. For a while each year brought with it slight innovations in kite design and effectiveness. Then came a foray into the world of commercial kites – including delta kites, power kites and fighting kites, each of which probably cost more than all the kites previously made by any one – or perhaps all – of us.

Although these all provided much entertainment, there remains that urge to actually make a kite from scratch, to glue and tie and decorate and then fly something that you’ve made yourself. As it turns out there’s a birthday coming up soon, so next weekend we’re having a kite day (weather permitting) to celebrate. With luck lots of kite-hopefuls will come along with kites they’ve made or bought and send them soaring up over the river. Those who arrive without kites will have the opportunity to make mini ones on the spot (from kits provided) and send them out to dance on the breeze too. Hurrah!