I was up at the crack of dawn yesterday to do some baking for an event at our place. I test-baked an apple/hazelnut cake a couple of weeks ago, replacing hazelnut meal with macadamia meal – because that’s what I had in the pantry (doesn’t everyone?). It turned out pretty well (the texture and taste of the macadamia meal simply delicious) and I was pretty confident that it’d work out okay the second time around too… but, just in case, I prepared a simple vanilla/apple teacake to pop into the other oven as a back-up plan. It never hurts to be a bit over-prepared – and the guests usually eat every last crumb anyway 🙂

I find baking very relaxing – particularly when the house is quiet – and my mind soon drifted onto other things as I pottered away. I measured and mixed, stepping over and around the ever-hungry scrounge that is our puppy and thought about my daughter, fast asleep in the back bedroom. On Friday she received notification that the house that she and her partner have been working towards and dreaming of for so long is finally theirs. From land purchase though design, planning approvals and – most particularly – bank shenanigans, it’s been a long haul for them. The past week in particular had been fraught with anxiety as to whether the house would pass muster, resulting in the funds being released to the builders (by the ever-nit-picky bank). It did – and they both positively glowed as they gave us the news that night – and many spontaneous happy dances of bouncy joy and group hugs ensued. Such happiness all round.

After camping in two rooms at our place for the past 10 months, with a minimum of personal belongings to hand (the rest being in storage), they’re more than ready to move into their own space again. Unpacking all their belongings, sorting through them and rediscovering things they haven’t seen in months will be a bit like Christmas morning. They’ll be able to move their kittens into a whole house (instead of a small cat run), set up chook pens for their gaggle of poultry and plant out the vast array of trees and plants that have waiting in pots outside our front windows. It’s going to be great fun to watch the next stage of their Gallifrey dream take shape and to help out where we can.

Thinking about their unfolding adventure made me reflect on my own dreams and aspirations – and to contemplate where I’m up to with those. Just over a year ago I attended a workshop entitled How to Become a Must-Read Author. The rather ambitious title set the expectations of the attendees fairly high – and  Rachael didn’t disappoint. She entertained and inspired the crowd of writers and would-be entrepreneurs very effectively, telling her personal rags-to-riches story in an inclusive and forthright way, tossing in random humorous anecdotes to lighten things up and to retain audience attention. It was a very polished performance and went a long way to showing why she’s so successful. My friend Karen and I were both quite impressed and came away determined to move forward with our respective book projects, utilising Rachael’s write-a-book-in-12-weeks as incentive to do so.

Part of this 12-week process was to focus on our key objectives for the next couple of years. There are any number of ways to undertake this sort of exercise, but I found mind-mapping worked surprisingly well as a first stage. I wrote down all the things I could think of that I’d like to do, see, be or achieve – no matter how implausible. Then I grouped them into categories and looked at those in an attempt to see what bigger picture I was trying to paint for myself. From there I moved on to hunting down some pictures to represent the various categories and put together a vision board, printed it out and stuck it up in my study to act as motivation to achieve those 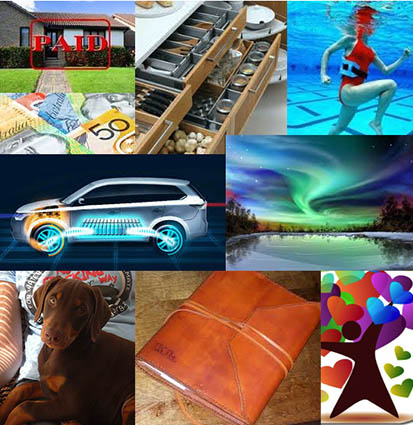 I’m not sure that having the print out on the back of my door helped in any real sense, since that sort of affirmation isn’t generally something that spurs me on. What was valuable, however, was the exercise of creating the vision board. It focused my attention on my wants and needs in a positive and proactive way. It made me actively consider how I could achieve the outcomes I wanted, rather than just dreaming about them.

So what have I achieved since then? It doesn’t feel like an awful lot, really – not until I stop and take an objective look at the past year. In reality, each of the key objectives on my two-year vision board has been addressed to some extent. From saving money to kitchen renovations, exercise to travel, hobbies to getting a puppy, completing my memoir to spending more time relaxing with people who matter to me – the current round of hopes and dreams is well on the way to being realised. Perhaps now that our house will be a little quieter, it’ll be time to set about a new round of mind-mapping and to come up with a whole new round of hopes and dreams to aim for.