Walking away from the bus the other day I was shocked by the hot wash of feeling that rushed across me. It was accompanied by the prickle of supressed tears, hunched shoulders and a powerful desire to avert my gaze. What could possibly have happened to produce such a powerful reaction? 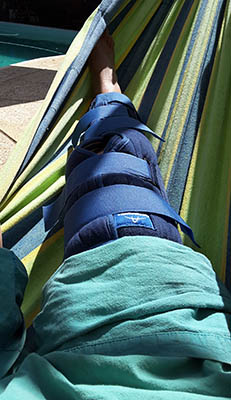 Fracturing my kneecap in early December last year is as good a place to start as any.

After six weeks in a very restrictive, heavily padded and reinforced splint, I was more than ready to hear that I could ditch it. The doc said I could also ditch one crutch and start doing physio. All excellent news.

So, as soon as possible, my single crutch and I headed off to the indoor pool. Since driving wasn’t on the agenda yet, the bus seemed a straightforward enough alternative. There’s a bus stop about 250m from our place – an easy walk. The bus would take me the 2km to the pool and then I’d walk about the same distance at the other end before doing my exercises and then heading back. After weeks of being mostly housebound, I was more than ready to give it a go.

Whilst getting on to the bus was easy enough, what I didn’t take into account was the dismount. And that proved to be more challenging than I could have anticipated.

The bus driver stopped a short distance from the kerb, rather than right up against it. Usually this wouldn’t be a problem. But standing at the open doorway, I could see I’d have to take a very big step down onto the road and that, with my limited mobility, I would probably fall flat on my face if I tried. I hovered indecisively in the doorway, effectively blocking the way out for the people who’d politely stood aside for me. It was really quite an awkward-panda moment. 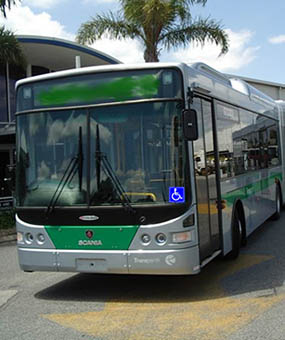 On the upside, the bus was one of the Transperth ‘fully accessible vehicles’ – as designated by the wheelchair symbol on the front windscreen. So the solution was obvious. All the driver needed to do was to lower the side of the bus so that I could step down safely. Unfortunately, he hadn’t noticed my predicament, so I had to turn and ask him to lower the bus. Awkward-panda moment number 2.

But it got worse.

As he lowered the side, he said Oh, do you want the ramp as well? – meaning the ramp for mobility aids, kiddies’ prams and so on. Without waiting for an answer, he closed the bus doors so that he could extend said ramp. Slowly. So very, very slowly.

By now I could feel every eye in the bus focused on me. Embarrassing just doesn’t cover it. But the ramp was finally fully extruded, the door opened and, with a tiny squawked thank you, I fled as fast as my knee, crutch and protectively hunched shoulders would allow.

I thought about my reactions while I was flailing around in the pool a little while later. Since all that had really happened was that I’d found getting off the bus a bit awkward, why on earth did I feel – not just embarrassed – but ashamed? I’d transgressed no social boundaries, knew no-one on the bus, certainly couldn’t describe any of them, and would probably never see any of them again even if I could. So why the hunched shoulders, tight chest, etc.?

But there you go: shame is a tricky emotion. It’s sneaky and can catch you unawares. According to dictionaries it’s caused by feelings of guilt, shortcoming or impropriety. Since I’ve always tended towards a rather casual approach to social norms and not been overly concerned about the opinions of others, this clearly wasn’t a case of guilt or impropriety.

That left shortcoming – and there it is: I realised that I was ashamed of being inadequate. It wasn’t the people on the bus I wanted to hide from, but from myself. My inability to do something as simple as get off a bus, no matter the reason, had made me feel that I’d fallen short of being me. I was feeling diminished by my inability to live up to some internal picture of myself. I wasn’t good enough and had let the side down.

And I think that’s what shame is: an uncomfortably self-focused emotion, resulting from feelings that you’re bad or unworthy in some way. Effectively, it highlights your worst fears about yourself. It doesn’t matter if others see the reasoning as silly, irrational or incorrect; you’ve been your own judge and jury behind the scenes without even realising it.

So how does one go about dealing with shame, whatever its cause?

There lies an entire box of tricks that I’m under qualified to open. All I can say is that, in my case, I think a good starting point was to step back and acknowledge the feelings. Accepting that they’re there and that the source was internal wasn’t all that difficult.

The next bit was harder though, as it involved trying to figure out what their root cause might be. I’ve had to be both introspective as well as analytical so that I can hunt down the source. I think I’m getting there.

In the meantime, I’ve made a pact with myself to be firmer with bus drivers – and to be a bit kinder to myself as I coddiwomple on through life. Sharing this story is an exercise in vulnerability and acknowledgement to help me along the way. I’ve no idea if it’ll help anyone else, but I think articulating it has helped me. Thanks. 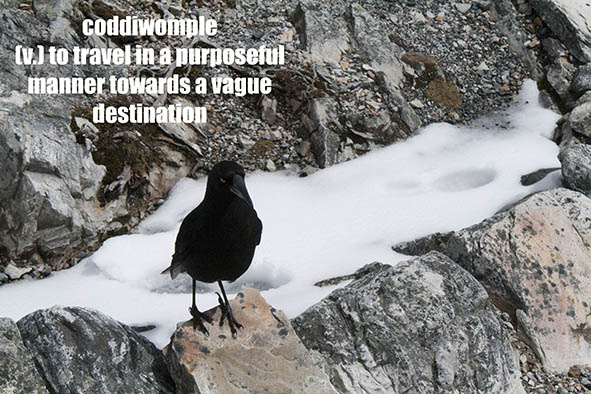