An Eish Frame of Mind

Have you ever found yourself in a situation where you use an expression that fits perfectly, but isn’t part of the local vernacular? A word or phrase that you’ve picked up somewhere, perhaps when living in another country or from popular culture/friends/associates?

Most often when I find myself doing so, the context makes the meaning apparent to others – even if the word/phrase isn’t in a language they’re familiar with. Sometimes, though, I get an odd look – admittedly this is usually when I make some obscure exclamation out loud to myself in public.

For example, when I try to carry too many things at once and end up dropping something… as often as not I end up exclaiming something along the lines of ‘Ja, jy wil mos!’ Unless another ex-South African is around, this sort of exclamation generally results in variations of the odd look. I guess I could use the English equivalent, but somehow it doesn’t feel as though it means the same thing. When I say ‘Jy will mos!, what I mean is Oh, come on, you knew that was stupid, but you would just go and do it anyway, wouldn’t you?’ And, seriously, who says something like that to themselves in the heat of the moment? 🙂

This use of random wordage came to mind earlier in the week, on one of my increasingly rare free-from-puppy-duties days. I’d crammed the day full of appointments, gym visits, shopping and so forth – racing from one to the other in order to get everything done before picking Cassie up from the vet after her sterilisation procedure. 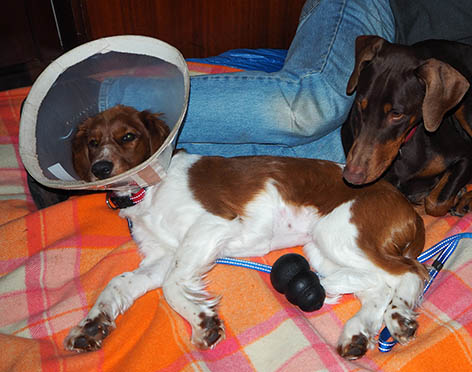 One of my stops was at the local Tastes of Africa shop, to pick up some of my favourite crackers (Provita) and to enjoy a vetkoek lunch. For those who have no idea what that is, vetkoek (pronounced fet-cook) is a traditional South African bread product made from yeast-based dough, shaped into medium-sized balls and then deep-fried. The result is something rather like a bread roll, but crispy on the outside and soft and fluffy on the inside. You then add your preferred filling and eat it piping hot. I chose to go all traditional and have mine filled with delicious savoury mince, chutney and grated cheese. So much yum in every mouthful!

Having placed my order, I took my table number over to my chosen seat. When I put it down on the table I had to laugh out loud – the table numbers are all South African expressions or place names, and mine expressed to perfection in one word my general take on the day. 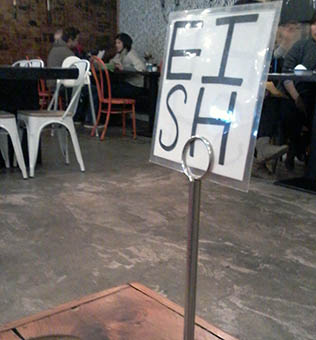 Eish is another weird South Africanism – it encapsulates exasperation, disbelief, resignation – and a whole bunch more. It’s not a word I used when I lived there, but I found that I picked it up when travelling around Tasmania with my brother last November. He uses it quite a lot as we had a number of eish-moments, many ending in laughter. Perhaps that’s why it’s embedded itself in my vocab and made me smile over my (very tasty) lunch. Nostalgia’s a funny old thing.

Thinking about this later, I realised that there are quite a few random expressions in my lexicon: some Afrikaans-based ones from my childhood, some Yiddish from my high school years and so forth. This is just the start of the list and it’s by no means comprehensive, but it may help people who experience my occasional odd comments / outbursts in public places 😛